Now I have been watching a lot of Christina Tosi’s cooking videos on Youtube lately, and I have seen so many people do the funfetti birthday cake. However, I personally do not want to do that. When I think of birthday cakes, I typically almost always have a fluffy, moist chocolate cake. Now to challenge myself even further, I opted to make the cake vegan. Why, you may ask? Because I wanted to.

For the layers, I opted for a chocolate cake, two different kinds of chocolate mousse, one using coconut milk, the other using water, a chocolate crumble, a taza chocolate soak and chocolate ganache to finish. Trust me, you won’t be missing chocolate anytime soon after trying this cake. The cake itself, I wanted it to be a fluffier cake, and I used my secret ingredient, Chinese black vinegar, to really round out the nuttiness of the cocoa. For the mousse, I took inspiration from Heston Blumenthal, who made chocolate mousse using water, dark chocolate, and salt, just combining them together, melting them, then whipping them over ice until it thickened and aerated. The other chocolate mousse, I made using coconut milk, inspired by Chloe Coscarelli’s method, just because I wanted a mousse with a lighter finish. The chocolate crumble, it’s basically my Oreo crumble recipe, but I omitted the Ovaltine to make it properly vegan. I used taza chocolate because I had learned how to make it during an International Culinary Festival that I was a part of, where we served dishes from all sorts of countries, including Spain, which is where the taza chocolate drink, a richer, Spanish rendition on traditional hot chocolate, was served. Why not just soak the cake with that, since we want it to be rich?

Combine the cocoa powder with the lukewarm water. Allow to sit for about 2 minutes. Combine together every ingredient, mixing to remove any lumps. Pour into a lined sheet tray and bake at 350 degrees F for about 30 minutes. Cool completely. 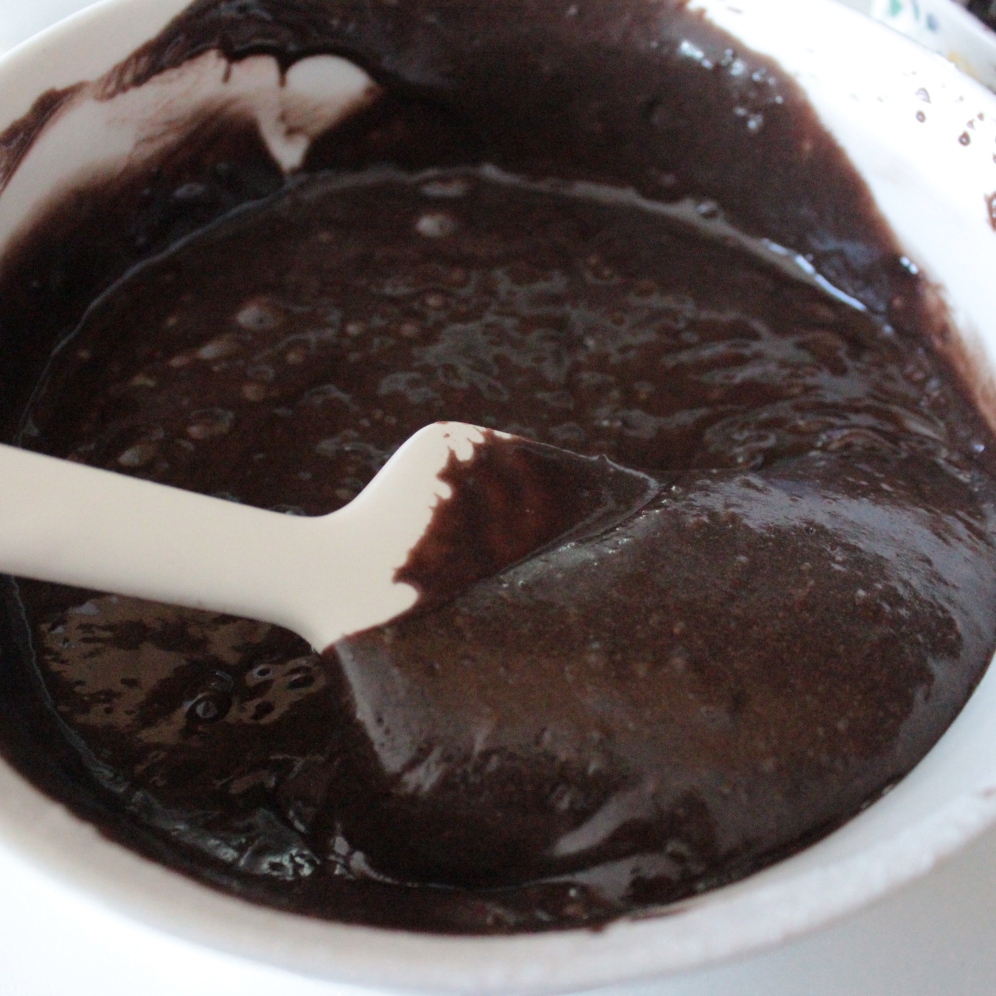 Using a six inch ring mold, cut out two perfect circles and two half circles. Set aside for assembly at this point. 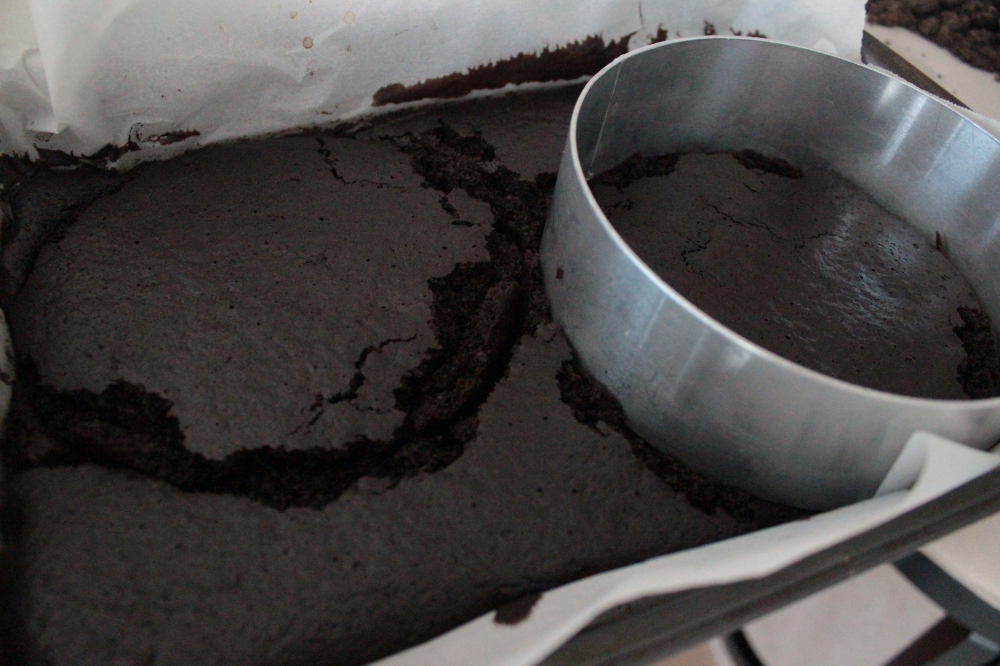 Combine ingredients and spread out onto a lined sheet tray. Bake at 350 degrees F for 15 minutes. Make sure that the crumble is cooled completely before assembly. 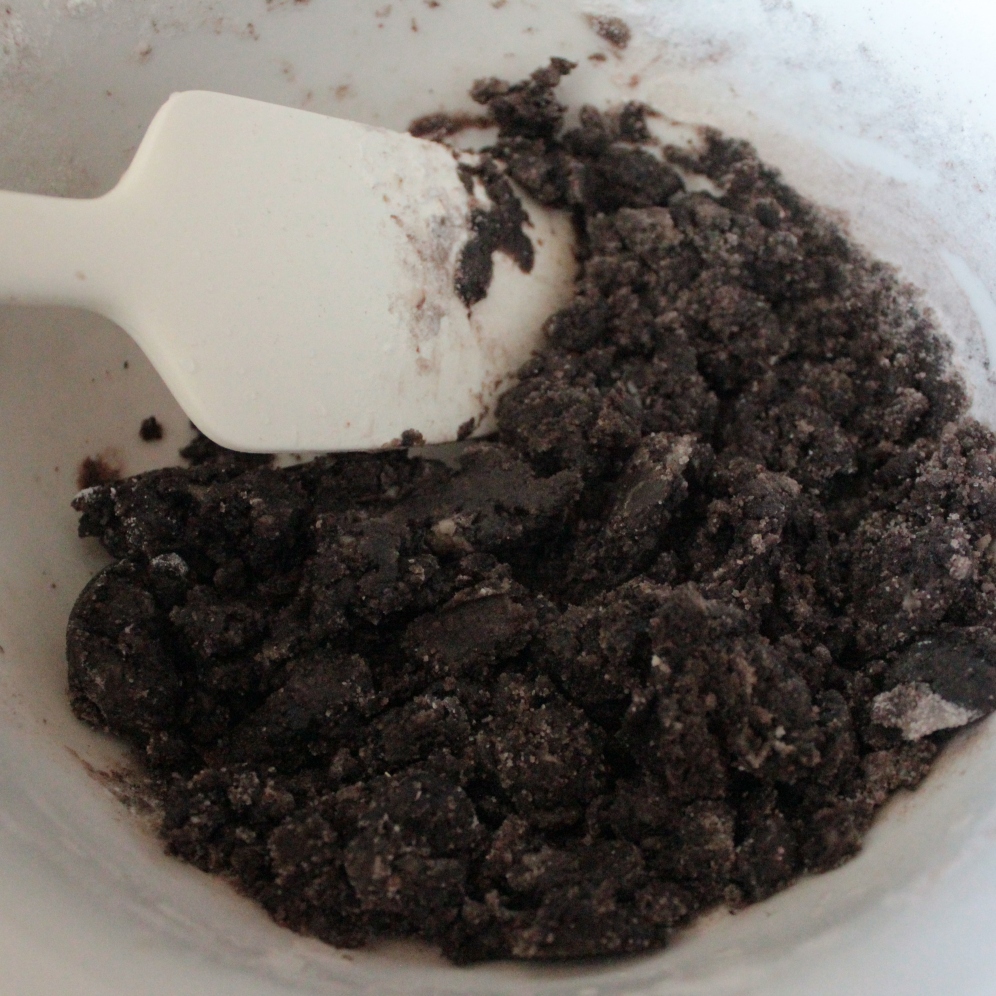 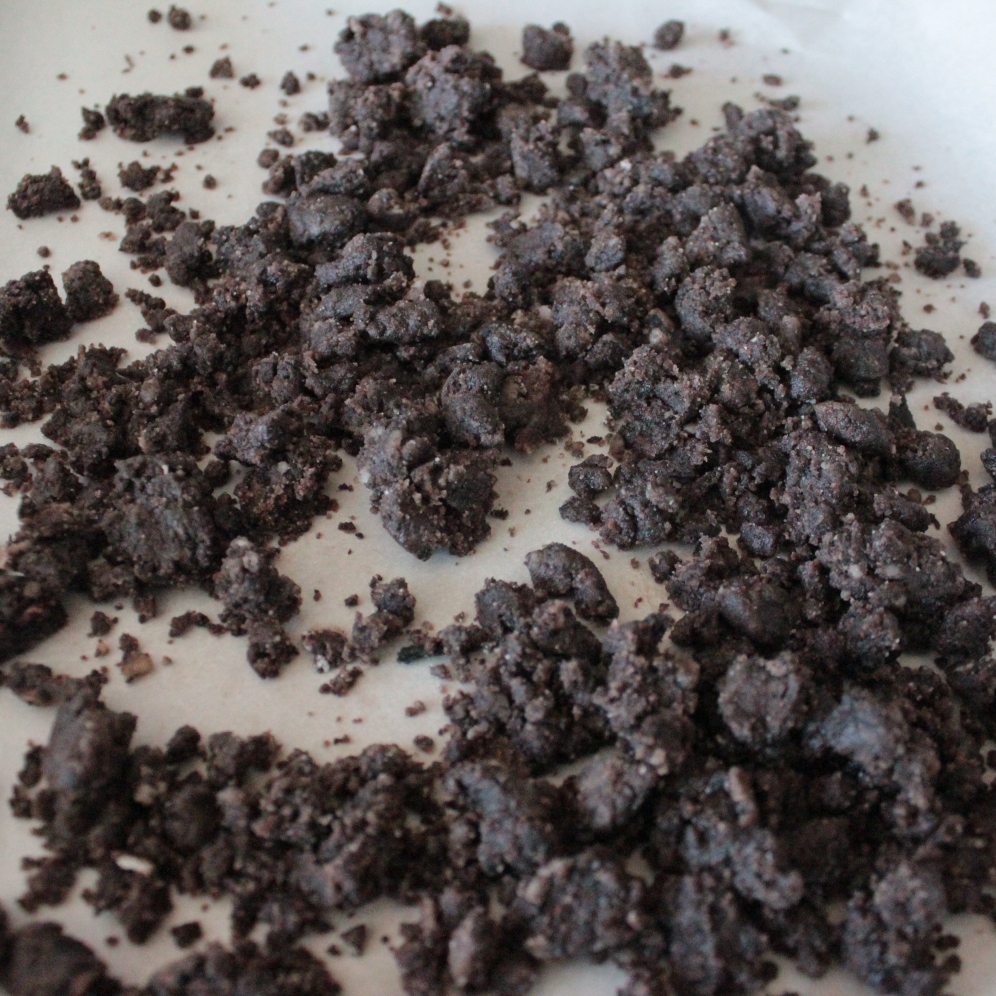 Melt chocolate over a double boiler. While whisking, add in the salt and water, little by little, and once all of the water is whisked in, continue whisking until the mixture is doubled in volume. Transfer to another bowl and refrigerate until assembly.

Melt down the chocolate and beat with the 2 tablespoons of vegan liquid until it is a fluid consistency. Then take the thickened portion of the chilled coconut milk and fold that in. Transfer to a bowl and refrigerate until assembly. 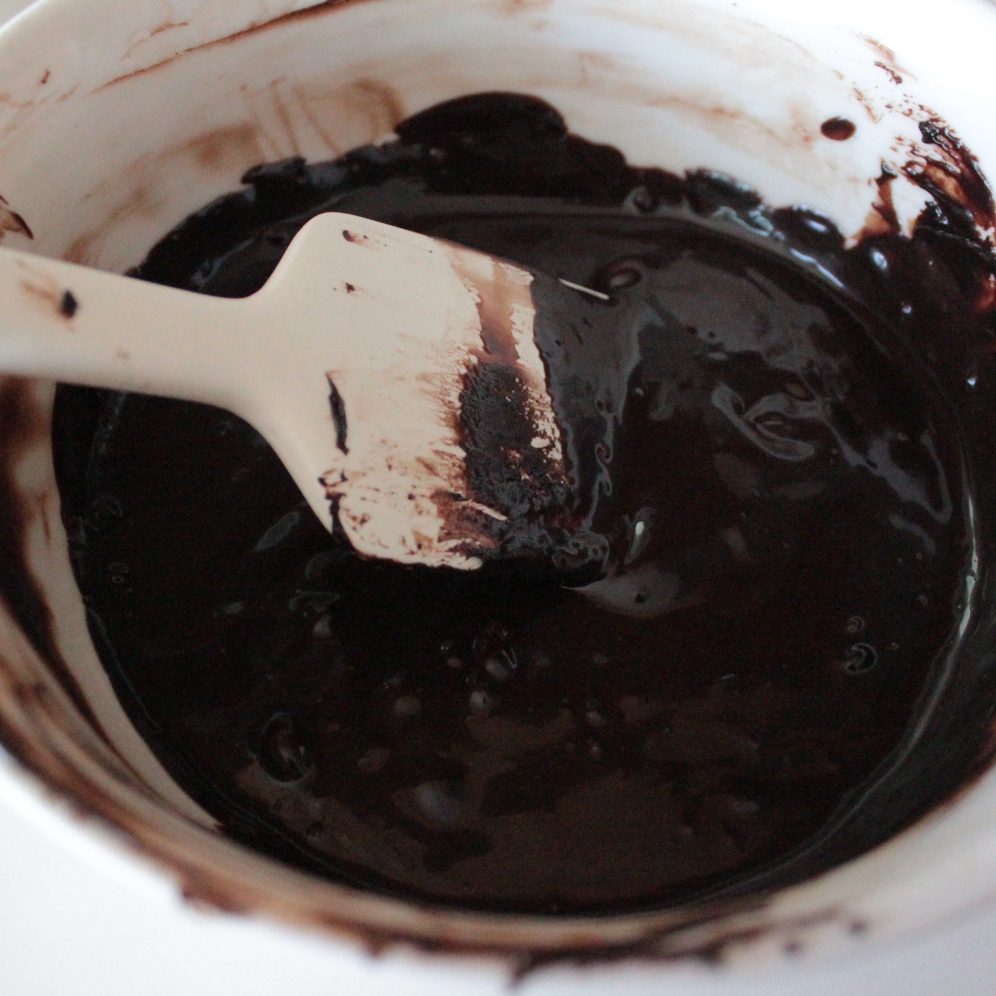 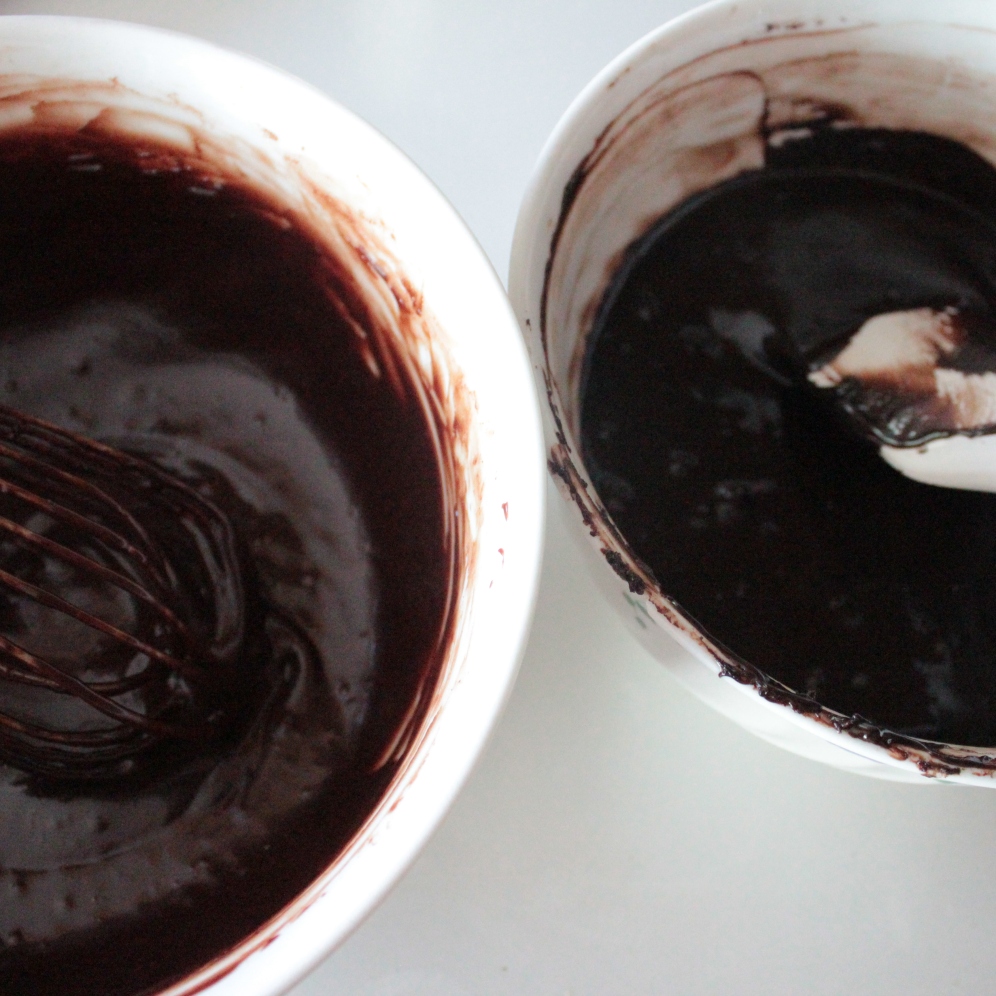 Combine ingredients and whisk. Bring to a simmer. Strain and cool completely before using in the assembly.

Combine together chocolate, milk, and salt. Melt together either over double boiler or on direct heat, while stirring constantly until the lumps are completely gone. Add in the oil to finish. Keep warm and as a liquid before assembly.

Assembly:
Line a 6 inch ring mold with parchment or acetate. Start with the jagged half circles of cake first, adding in any other bits of cake from the scraps to fill in the cake and create a proper layer. Soak with one third of the taza chocolate liquid. Scoop on about half of one of the mousses, spreading it evenly over the cake, then sprinkle in one third of the crumble, then spread on half of the other mousses. Add on one of the other layers. Repeat the same steps with soaking, scooping, spreading, sprinkle, and then top with the last layer. Soak the layer of cake with the remaining liquid, then refrigerate for 1-2 hours so that the mousses can set first. Once the cake is solid, unmold, and then add on the ganache, spreading that over the top layer. Finish with the crumble. 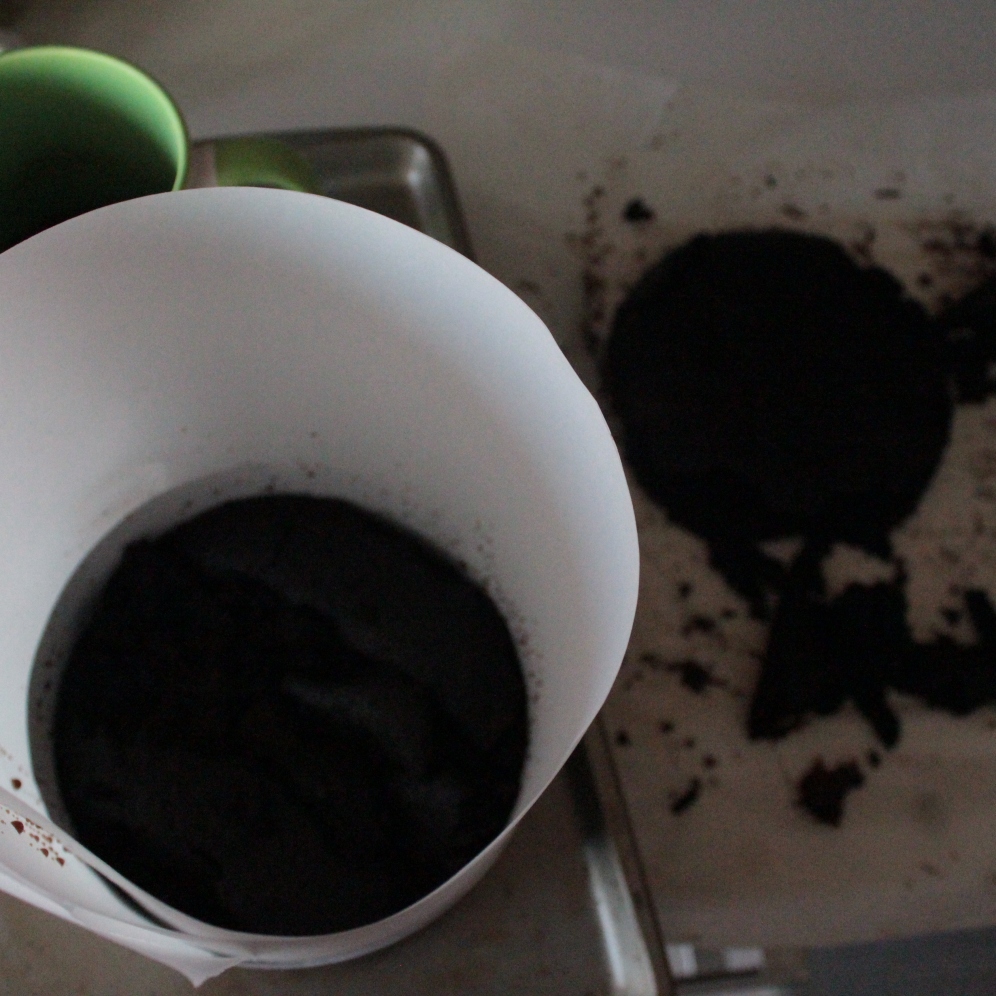