So I came up with this concept after a quick chat with my friend Sam (you might remember him as the lawyer from my season of Masterchef). His son Jude’s 2nd birthday was coming up (it will actually be when I post this, so go and wish his son a happy birthday if you’re reading this!) and we were talking about Sam making a birthday cake for him to celebrate! So after a quick discussion on what Jude actually likes, I found out that he likes bread. From bread, I was just thinking of what I could do with that. One of my first thoughts was a bread pudding. But that’s kind of simple, and in layer cake form, that would be really unpleasant. As delicious and rib-clinging as bread pudding is, if you have ever seen the cross section of one, it isn’t the prettiest or most celebratory thing. So I thought about the next thing I could associate bread with, and that was sandwiches. Most sandwiches are savory, and I just made a tropezienne recipe. However, I didn’t want to give Sam a recipe for tropezienne, just because that isn’t the easiest thing to make if you aren’t familiar with making brioche from scratch, and this needed to be a failsafe recipe, just because it is for somebody’s birthday. So then I thought about just making a layer cake with the flavors of a sandwich. And there was just one sandwich here that could do the job perfectly.

Peanut butter and jelly. I’m pretty sure almost every kid in the America has eaten at least one PB&J for breakfast or lunch at some point in their childhood. For my rendition, I really wanted to capture those flavor profiles. For the bread aspect, I went with flavors of malt and brown butter for the actual cake, while I also included rusk, which is candied bread (popular in Korea and Japan) as my textural element. For the peanut butter, I wanted to do a mousse, just because I wanted to really lighten it and capture the creamy qualities of it as opposed to the cloying and thick aspects of it, which I personally find to be unpleasant. With the jam, I debated between doing a buttercream or just trying something else with it. I went with the something else idea because I wanted to be original here. So I went with a fluid gel, made with the berry coulis, and thinned out with citrus, to make it bright, vibrant, and tart, just to further cut through the richness of the mousse and to lighten up the cake itself, since there’s freaking bread in the cake. 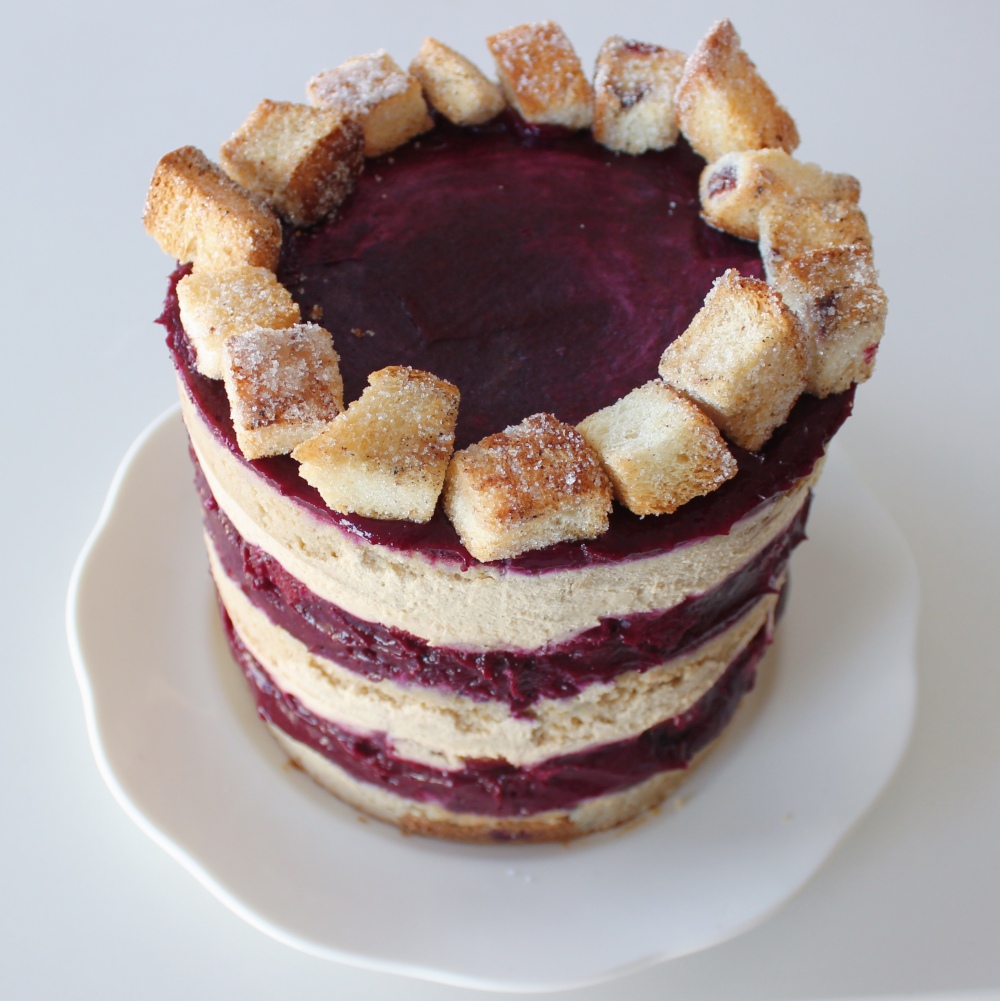 Combine ingredients together to form a smooth batter. Pour into a lined sheet tray and bake at 350 degrees F for 22 minutes. Cool completely. Cut out three 6-inch circles, two full circles, and one cobbled together one.

For the rusk crunch:
6 slices of bread (I would recommend milk bread or brioche)
1/4 cup granulated sugar
3 tablespoons brown butter
a pinch of salt

Do a small dice on the bread for 5 of the slices, and a larger dice on the last. Toss the bread with brown butter, salt, and sugar, and toast in the oven at 350 degrees F for 4-5 minutes, or until the sugar has completely crystalized around the bread and the bread itself is evenly toasted. Cool completely. Use the larger pieces for garnishing and the smaller for assembly. Store in an airtight container before using.

Melt agar into sugar, salt, purees, and lemon juice and zest. Pass through a sieve and allow to set until slightly firm in the freezer. Bloom gelatin in water. Melt into the blood orange juice and zest. Pass through a sieve once the gelatin is melted in and pour into a blender with the set berry gelee. Puree until smooth. Allow to cool at room temperature until is it room temperature for assembly.

Combine. If you struggle with this, then I don’t really know how else to help you.

Melt gelatin and salt into water on low heat. Cream together the cream cheese with peanut butter and pour in the gelatin mixture, whipping until combined. Add in your vanilla at this stage as well. Fold in the heavy cream. Keep at room temperature.

To assemble:
Start by lining a 6-inch ring with acetate. Place one full circle of cake down first. Add in 1/3 of your soaking liquid, then spread on about 1/3 of your gel at the bottom. Place on top of that half of your rusk, then half of your room-temperature mousse. Repeat with the second layer. For the third layer, start with the soak, then place on your buttercream. Refrigerate for at least 2 hours before unmolding. Once ready to serve, garnish with your bigger pieces of rusk. 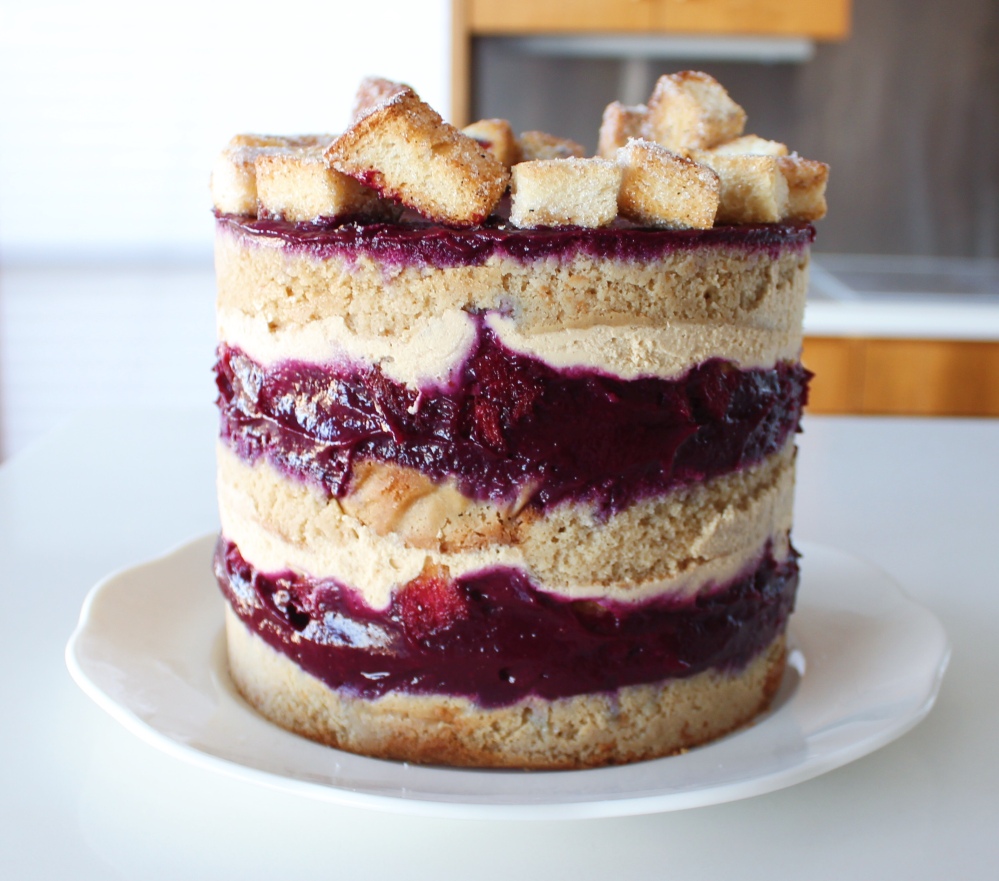