The idea of doing a cotton cheesecake came from when I visited my friend, Lauren, and we were trying to make these for her menu at LimeRed, in Boston. I tried to make a cream cheese chiffon cake, hoping that it would work instead of a cotton cheesecake, something she struggled greatly with making, but alas, my chiffon cakes fell as well. There was just something about baking with cream cheese that really stumped us both.

It dawned on me after seeing my cheesecakes fall that maybe we were overwhipping the egg whites; I was so used to whipping the living hell out of them when making chiffon cakes that I did not pay attention to the science behind a Japanese styled cotton cheesecake. While yes, the batter requires egg whites for the cake to rise, the fact that the majority of the batter is centered around fat and dairy means that too much inflation will result in deflation.

The easiest way to put it is when you’re baking a souffle; you use the egg whites to raise the batter, but then after a certain point when you leave it out too long, the souffle will begin to collapse because the egg whites can’t hold the air in the final product for too long. In a cotton cheesecake, you need to balance out the stability in the cream cheese and eggs from when those finish baking to how much air should the egg whites hold for this batter. So in short, try using medium peaks. It’s harder for the cake to deflate when the cake is already using not fully-aerated whites.

I wanted to use craisins in my cake, because the traditional recipe uses raisins, but I wanted to embrace fall and use cranberry-raisins as an homage to that. I used elderflower liquor and honey to soak mine, since rum soaked raisins are a thing, but I did not want to stick to that tradition.

Soak together for 30 minutes, or until the craisins and plump and moist.

In a double boiler, melt down the cream cheese, butter, milk, salt. You need this to be a smooth liquid. In another bowl, whip the egg yolks with vanilla and half of the sugar until it is stiff and forms ribbons. In another bowl, whip the granulated sugar with egg whites, vinegar, and cream of tartar to medium-stiff peaks. In total, you will have three bowls, one containing the melted cream cheese, one with the whipped egg yolks, and another with the whites. Sift the flour into the egg yolk bowl, and start folding in each mixture, alternating until you consume all three. Line a six inch ring mold with parchment paper and place on a nonstick baking surface. Add the craisins to the bottom. Pour in the cake batter and bake at 325 degrees F for 50 minutes. Once 50 minutes pass, turn off the oven, and continue to let the cake sit for another 20 minutes before removing. The whole point of staging the removing times like this is to keep the cheesecake from sinking. Fun fact: cotton cheesecakes are temperamental bitches, and they can piss you off if you are not mentally prepared to face them in that regard. 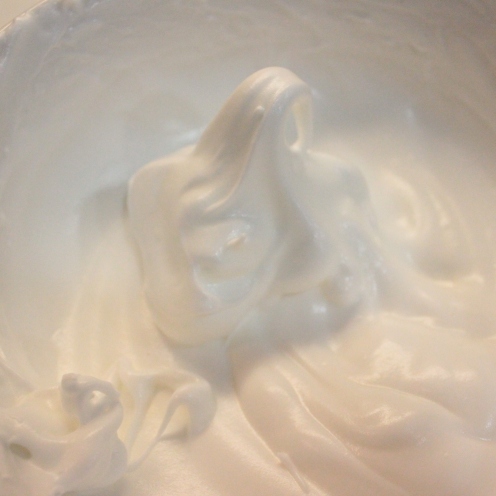