This dessert came about when I was watching a shoujo anime, “Kobato” and I was inspired by a character named Ioryogi, being this outwardly cute blue dog creature, and his love of baumkuchen, a circular German layered cake that resembles the rings or layers of a tree. Normally, baumkuchen is made on a spit roast in an oven, but most people don’t have access to that For the dessert, I wanted to celebrate baumkuchen and blueberries, as a nod to Ioryogi.

For the dessert, we have a ginger-coriander baumkuchen, toasted spice curd, blueberry consomme, and blueberry foam. I wanted the dessert to really focus on the blueberries, so I wanted to create a consomme, a translucent blueberry sauce which has that concentrated blueberry flavor, as well as a foam, just to contrast the consomme. The base of the foam is actually made from a blueberry coulis, being a blueberry sauce that has a more intensified flavor than the consomme, but at the cost of it being a lot less clear in appearance from being pressed and strained; the impurities and flavor of the blueberry is more imparted into the coulis as a result of that, but since the coulis is being aerated, it will no be more balanced.

In a bowl, whip eggs, sugar, vanilla, salt, spices, and honey to ribbon-stage. Fold in the sifted flour. Then take a portion of your batter, no more than 1/4th of it, and fold that into the butter. Fold everything back together. Line a small loaf pan with butter. Add no more than 3 tablespoons of batter onto the cake pan, spreading it out as evenly as possible, and bake at broiler or 500 degrees F for 1 minute. Take out of the oven, add in 3 more tablespoons of batter, spread it out evenly again, and bake again for another 50 minutes. Continuously do that, baking off the remaining layers at 50 second intervals, until all of the batter is consumed. Remove the cake from the pan and trim.

Combine ingredients and cover with plastic wrap. Place over a double boiler and cook for 50 minutes on low heat. Pour the berries through a strainer, but do not press. Store the liquid and keep the berries for making the coulis with. 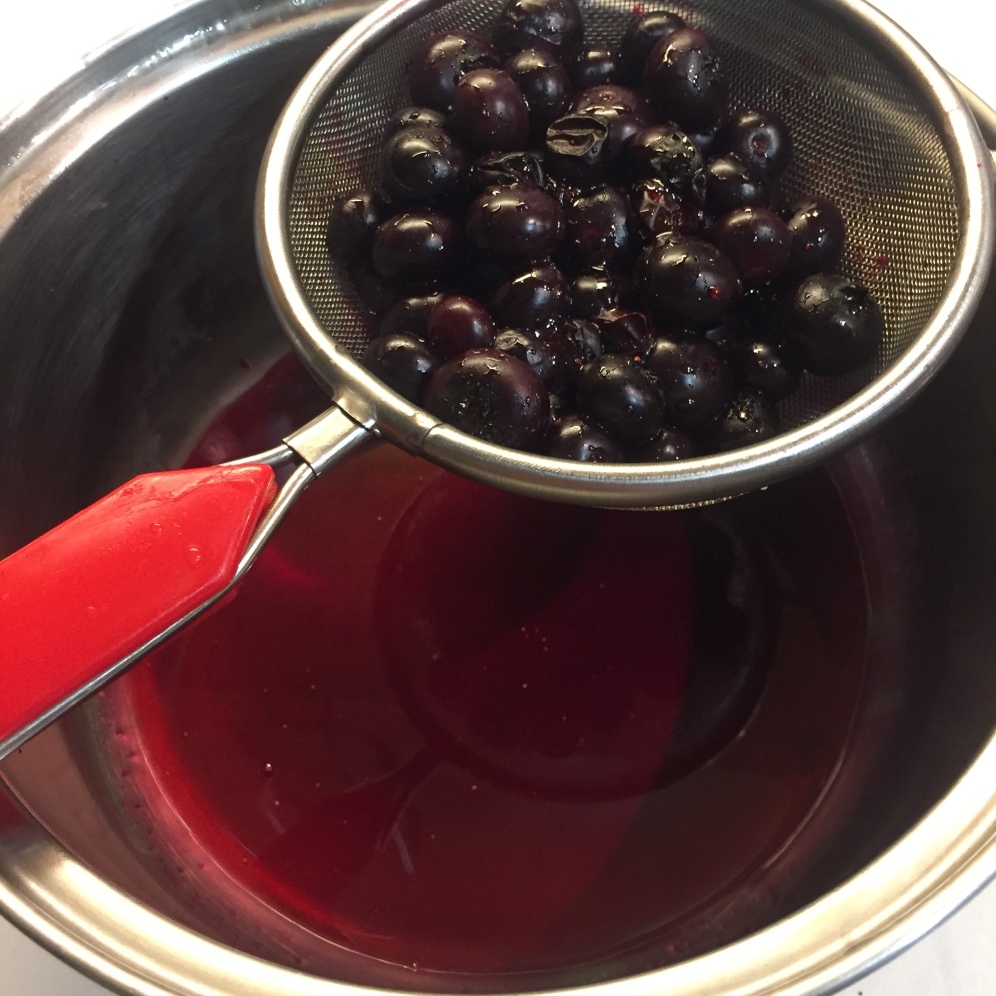 Toast the ginger, coriander, and salt. Deglaze with water and lemon juice or cider vinegar. Whip the egg yolks and sugar. Temper the egg with the liquid and whip over heat until the mixture is thickened. Add in the vanilla extract and butter. Strain and cool completely.

For the coulis:
Berries from the consomme
1/4 cup water

Add the bloomed gelatin to the coulis and allow it to melt in. In a mixing bowl, whip up the egg white and slowly add in the coulis, a little at first to temper the egg white, then the remaining. Whip into light, airy bubbles and use immediately.

For assembly:
Start with a small pool of the consomme. Plate three 1-inch cubes of the baumkuchen, around the pool. Place blueberries on the plate, followed by the curd. Finally, drape the dessert with the foam. Serve immediately.