I literally only made this cake because we had about 15 passion fruits lying around and I needed to start getting rid of them before they went bad. The cake itself has five different layers to it, being coconut-brown sugar cake, salted coconut caramel soaking liquid, coconut cream, passionfruit curd, and coconut crumble. I think it came out better damn good, but that’s just me tooting my own horn. This cake is not too sweet, since I used next to no sugar in the coconut cream, and I take my caramel to a darker color, NOT burnt, just darker, so that it won’t be cloying. I fucking hate cloyingly sweet things that make your teeth hurt and remind you that you’re no longer able to properly stomach a candy bar or even milk chocolate. It makes me hate children, honestly, out of envy, since they can actually tolerate those levels of sugar still.

In retrospect, I could have just made another passionfruit souffle, but where’s the fun there? I wanted to do something different, hence why I opted for a completely different coconut filling for this naked layer cake to the filling I had in another one. I didn’t want to be called out for doing the same filling for the same kind of dessert. That’s just lame. And life is too short to be lame. Be awesome. Be original. Be ambitious. Not pushing yourself, or shrinking into your own routine, I hate that. Why be known as the Asian who cooks only Asian? I’d rather be known as the guy who can bake basically anything and everything. That’s more epic. But enough about making jabs at the lazy or unambitious or making you feel inadequate or unaccomplished. There’s plenty of assholes who I went to high school with who do that in spade-loads. I won’t contribute to putting those who are already down on themselves lower, mostly because I was targeted by those bitches, and for that, I hope that they all get shat on by pigeons and contract bird flu. Come on, universe, I’m putting it out there.

Wow, I have not really spoken about the cake much to at all in this post. Basically, it is coconut-passionfruit-caramel, it is moist af, to the point where you are beyond just mildly uncomfortable with using that word to describe it, full of tropical flavors, and I would almost say that it is very Hawaiian, but then my friend from Honolulu, Lauren, would probably flank me, so I will stay away from using that description. I will admit that the cake is regrettably more coconut-forward than it is passionfruit, but again, I didn’t want to make a passionfruit-only dessert like the souffle. This cake offers variety, albeit more so in the coconut department. If you like coconut, you’ll love this cake. If you hate coconut, hope that you’re not on my shit-list, or else I’ll find you and force-feed you this while playing “It’s a Small World”, just to make it a power move.

To toast the flakes, put into a tray and place in the oven when the oven is preheating. When the oven reaches about 300 degrees F, the coconut should be toasted. Whip egg whites with sugar, vinegar, and baking soda until they reach stiff peaks. Combine together all of the ingredients. Pour into a shallow baking tray, lined with parchment, and bake at 350 degrees F for 28 minutes.

Skim off the fatty solids from the can and whip until soft and creamy. Whip heavy cream until stiff. Season with salt. Fold together. Keep room temperature until it is time to assemble the cake.

Bring sugar and salt up to heat until they melt and begin to darken. Add in the liquid, off reach, and mix to combine. Add water or coconut milk to keep the caramel a loose liquid.

Combine yolks and sugar. Heat up passionfruit pulp and salt. Temper and whisk over heat until light yellow and thickened. Chill completely before using.

Combine ingredients. Crumble up and bake in the oven at 350 degree F for 20 minutes.

Assembly:
Create three layers of cake using a 6 inch ring mold. If needed, shred up the cake for the bottom layer. Line the ring mold with parchment paper, reaching at least 2 inches above the end of the mold. Pour the crumbled up cake layer on the bottom, and soak with 1/3 of the caramel. Add on the coconut cream, crumble, passionfruit curd, and repeat. For the top layer, place on the fillings and garnish with the crumble. Refrigerate overnight to allow everything to set before you remove the parchment. 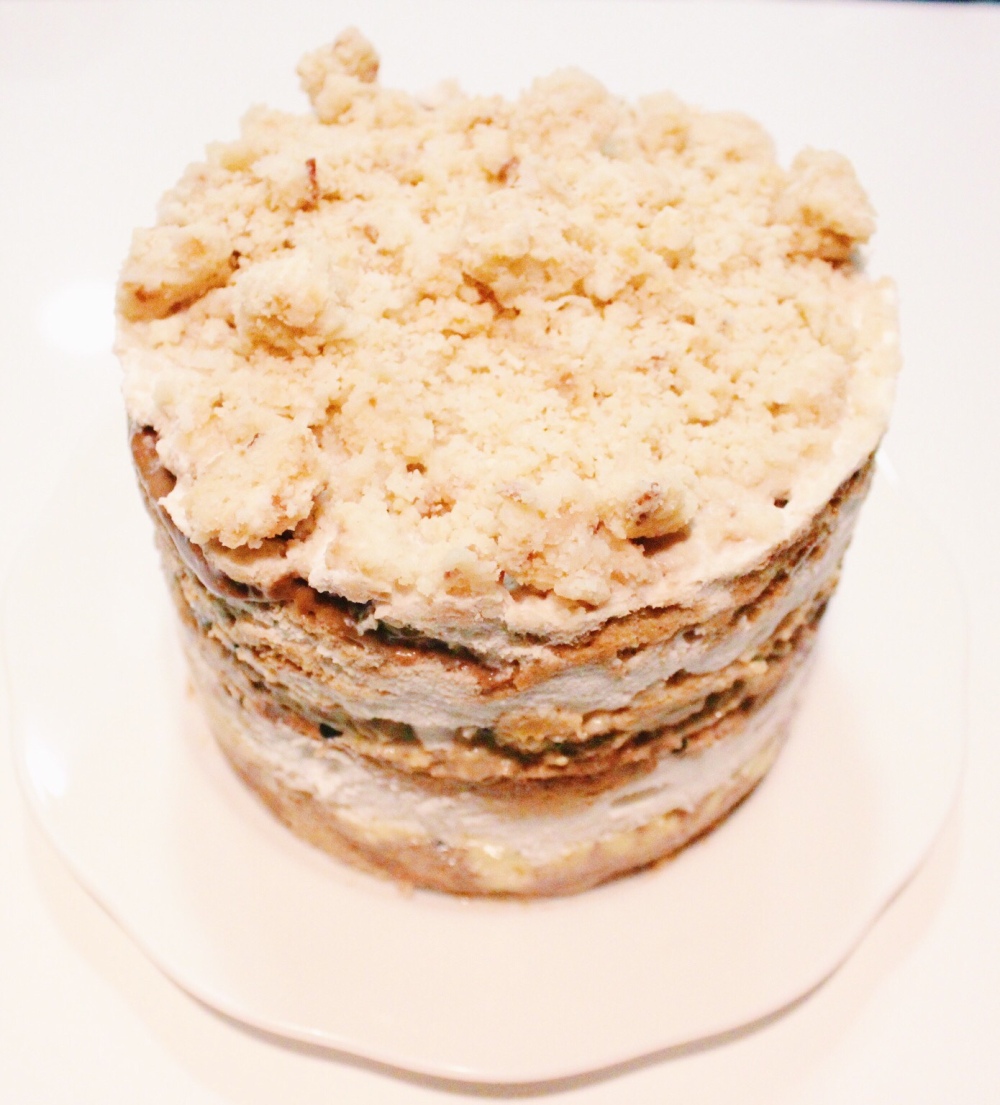