I actually came up with this concept when I was testing a dessert recipe for an upcoming pop-up in Dallas. Unfortunately, the test run didn’t necessarily go as planned, but I didn’t want to throw away the ingredients, so I shifted gears, and went with a rice pudding instead. What I love about rice pudding is that it’s rice, but in a dessert format. Growing up, I was always told I had to finish my rice, because a lot of labor went into cultivating it. People would have to step on the kernels to break off the shells, rinse it thoroughly, all just to get it to be edible. Rice pudding also has a strong sentimental value to my friend, Bri. Her family is Danish, so during the holidays, they would have rice pudding for dessert, and there would be one candied almond in the whole batch. Whoever got the almond would have to hide it in their mouths, and reveal that they had it at the end of the night, in which then after, Bri’s grandmother would give them a personally selected gift. I find that with rice, it represents prosperity and good fortune, for me anyways, so I named this dessert “Counting stars” as a reference to counting my lucky stars in being fortunate enough to have rice to eat and friends to share great food memories with!

For the rice pudding, we have a coconut milk tea that we steeped the jasmine rice in, and with that, some toasted coconut, candied sesame and walnut, a sesame-soy milk ice cream, and soy caramel. For the tea, I used earl grey, but any black tea works really well in this dessert. For the soy caramel, I used both soy milk and soy sauce in it, just to add the body to caramel and the salt. I love the candied sesame and walnuts in this dessert, just because they add that needed crunch and they’re just delicious. Going to Chinese restaurants, I would be served something similar all the time, so this is really an homage to that memory and experience for me. Overall, it’s not a terribly complex dessert, except maybe the ice cream, but it is a really delicious one and it’s basically comfort in a bowl. I garnished my dessert with nasturtiums, the green leaves, because they do add some pepperiness. I love using them personally, and with a dessert that is rich and has so many sweet components, I figured something fresh and a bit spicy helps with counteracting some of that and prevents it from being cloying. Lastly, this dessert is ALMOST gluten-free, but that would depend entirely on the brand of soy sauce and the brand of cornstarch you use. So long as you use gluten-free brands, then it is indeed free of all gluten. 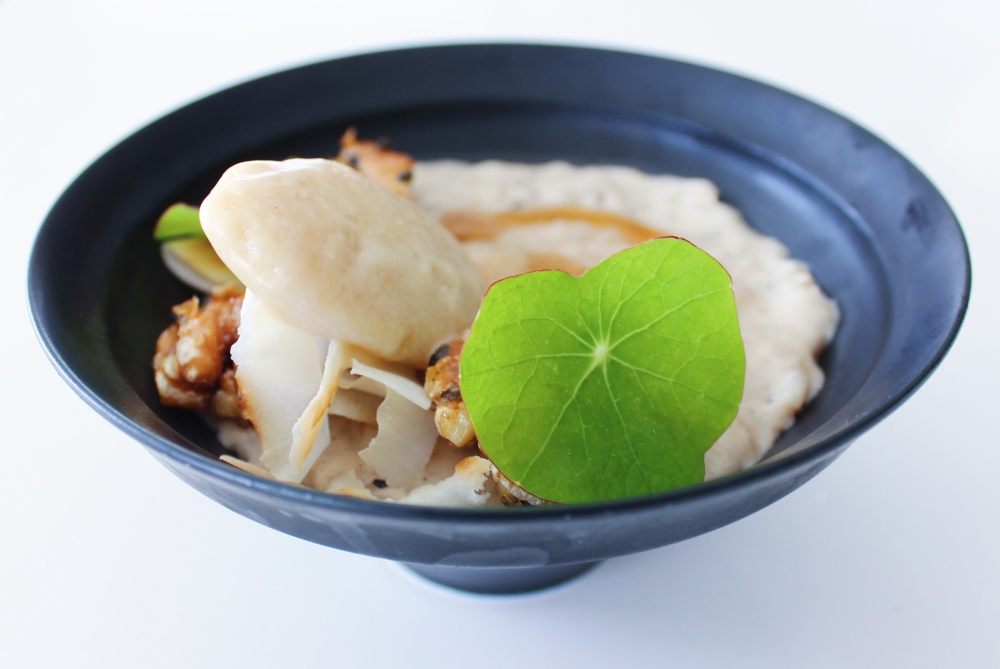 Melt palm sugar and tahini into the soy milk. Temper in the cornstarch and salt, and whisk on medium heat until the mixture has thickened slightly. Take off heat and whisk in the vanilla. Churn in an ice cream maker and freeze for at least an hour.

Steep the tea leaves in the milk on low heat for at least 10 minutes. Allow to sit in the refrigerator for another 20 minutes before straining, pressing against the leaves to extract as much flavor as possible.

Combine in a nonstick pot and stir on low heat for 15-20 minutes, or until the mixture has thickened considerably. It needs to be more rice than liquid, but the rice has to be tender. Portion into serving bowls, and chill down to room temperature.

Combine palm sugar and water and simmer down until it reaches about 250 degrees F(it should be an amber color). Hit with the soy milk and soy sauce, and turn the heat down to low. Stir together and allow the caramelized sugars to melt into the liquid fully. Keep at room temperature.

Toast the walnuts and the sesame seeds in a nonstick pan with salt first. Toss in the sugar and stir until the sugar dissolves and sticks around the exterior of the walnuts. Pour onto a nonstick surface and allow them to cool on there.

Toast these in a nonstick pan until the edges begin to brown. Cool down completely before using.

Start with your caramel first, pouring that in a spiral over the rice pudding. Garnish with the walnuts, coconut flakes, nasturtiums, and finally, a quenelle of the ice cream. 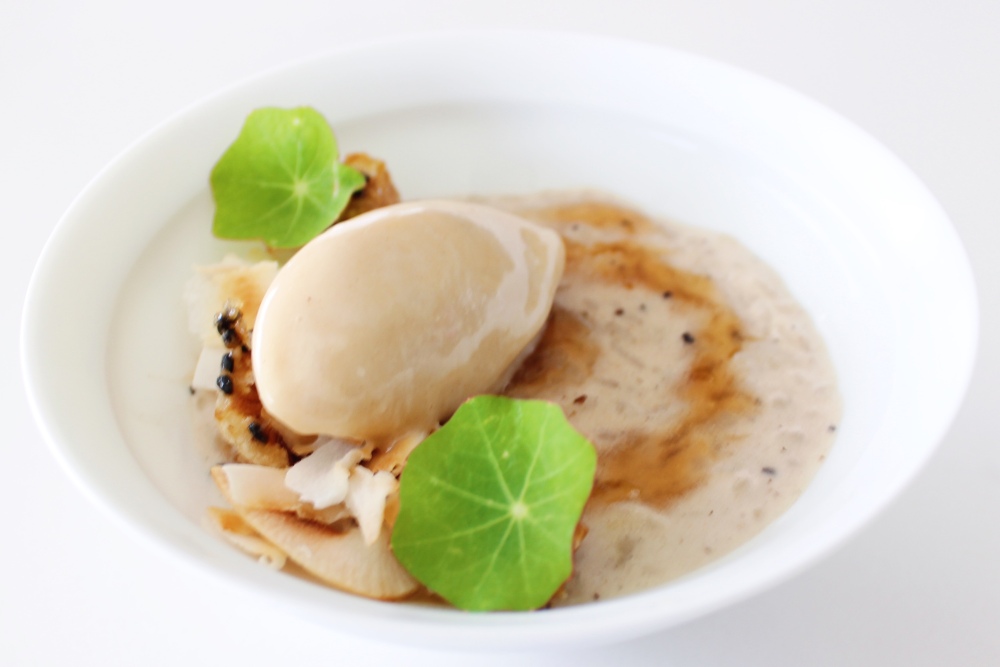