Khanom buang are Thai crepes, which can be either sweet or savory, and are typically found in stalls served as street food. The first time I ever heard about Thai street crepes was actually watching Iron Chef America, Battle Tamarind. The challenger, Hong Thaimee, was making these with her dessert, although she prepared a baked version. For my recipe, I wanted to do a griddle version, which is more traditional anyways.

Before you ask, I am not Thai. I am Taiwanese. The two are completely different countries with completely different cuisines . But I have been to Thailand, and I have tried a lot of authentic Thai dishes before, such as green papaya salad and obviously, pad thai, so I have some familiarity with Thai flavors, such as fish sauce, lime, and tamarind to name a few ingredients.

The typical fillings you would find in this dessert are meringue and foi thong. Foi thong are golden, silk-like threads made by simmering streams of beaten egg yolks in a simple syrup. The meringue will be slowly cooked on the griddle with the crepe, which is why it is okay not to bake off or torch the meringue at all, because the heat from the crepe will kill off the germs. As for the foi thong, it will have almost the taste and consistency of mango, and I have actually prepared my rendition of khanom buang back in my freshman year of college. I did not really need to do much research on figuring out how the hell to make either of the fillings because of my prior experiences making this. I will admit, however, that I took a shortcut by making the crepes in the style of French crepes, so the fillings were authentic, but the crepe was not even Asian in attempt.

Now I could have just read up on and stolen a bunch of other people’s recipes, but what’s the fun in that? I want to challenge myself by making a recipe that is genuinely my own, but using authentic techniques and traditional ingredients. Instead, I referenced a couple different recipes and articles, just to figure out what exactly goes into this, and I went from there. A lot of recipes use a mixture of mung bean or pigeon pea flour and rice flour to create the batter. But since I’m making this recipe my own, I’m opting to use rice flour and tapioca flour instead, just to give it a crispier finish than what mung bean flour would have provided.

Whip the three egg whites with the lime juice into soft peaks. While still whipping, pour the egg thread syrup, while it is simmering hot, into the egg whites to create your meringue. 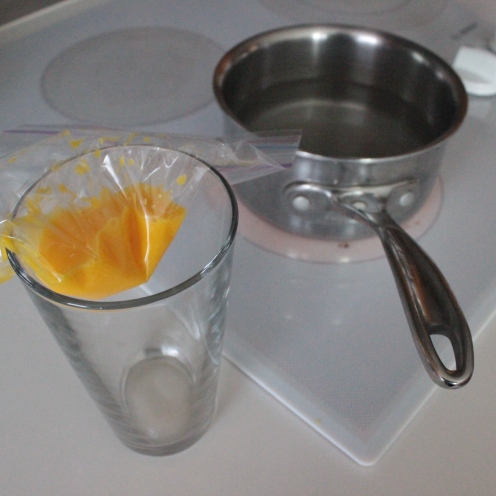 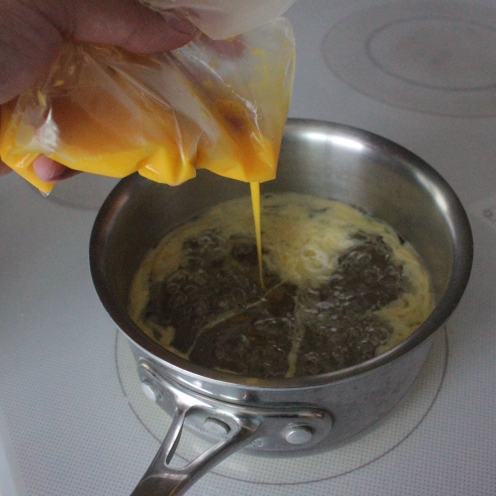 Combine ingredients. Lightly oil a pan and put on medium-low heat. Gently pour on about 1 1/2 tablespoon’s worth of batter per pancake, onto the surface and allow the pancakes to begin crisping up (about 15-20 seconds). Spoon on 1 tablespoon of the meringue and a small amount of egg threads onto each pancake, and allow the pancakes to sit again for another 2-3 minutes. Fold up and remove the pancakes and continue this until you use up all of the batter and filling. Enjoy while still warm!