I was inspired to make this dessert when I saw a Japanese wind chime, also called 江戸風鈴 (edo fuurin), just laying on my desk, and thought “maybe that would be fun to create a dessert from.” After deciding that I could replicate the entire wind chime using sugar for the glass dome and either white chocolate or spun sugar for the thread, and some sort of gelee for the tag, I thought about what the rest of the dessert would be based on. I imagined buying one of these on a warm summer night at a festival in Japan, and then accidentally leaving it on the bench, where it then somehow rolls off on its own and falls into the dirt of a nearby tree. From there, I thought about what could be in the dirt with the wind chime. Maybe an acorn and some berries? And that’s literally how my dessert came into fruition.

I decided to make an acorn using chocolate, by piping a chocolate mousse into something and serving it in the fashion of a creamy truffle-type component. For the base of the acorn, I debated on a couple different things. I could do a disk of chocolate, or a small round of chocolate cake. If not those, then maybe like a meringue, piped onto a small silicone dome, which I have definitely need on Instagram before. I decided to do the meringue, and from there, I thought about either using cocoa powder in or on the meringue to dye it brown, and maybe add some chopped walnuts into it to make it a dacquoise, which is like a nut infused meringue cookie-cake-type thing. Since I was going to do a gelee anyways, why not flavor the gelee with a berry, and use the berry as a sauce, that could be filled into my glass wind chime dome? The soil, that was obvious. It was most likely going to be a chocolate crumble or sorts anyways.

This dessert was actually a challenge to pull off for a couple reasons: making the acorn took me a few attempts, because I initially tried a walnut dacquoise, and that came out lumpier than I wanted, and my cocoa powder infused meringue never got to soft peaks, because the oils from cocoa powder prevent a meringue from forming. In the end, I opted to use a plain French meringue, whipped to soft peaks so that it would not pipe too cloud-like and frothy, dusted in cocoa powder and then baked on a small half-dome mold to form into a cup for my chocolate mousse. And since I already had the walnut infused meringue as well as the cocoa infused meringue, I decided to use both of those as the base for my crumble, combining them with their egg yolks and melted chocolate to create a riff on gateau au chocolat, a dense chocolate cake typically studded with walnuts anyways. By crumbling up that cake, it would resemble dirt, and give the overall dessert more of a body and main component to it.

Another issue I wound up running into was the dome for the wind chime. Initially, I tried to use pulled sugar for the dome, and that failed epically after two attempts and realizing that I don’t have an air pump to make blown sugar domes to at least salvage the sugar. So then I had to settle on hard crack toffee, which took more than a couple attempts to get right in terms of setting it into the silicone half dome molds I had. However, when I finally got it right on attempt number 5, it was a huge sigh of relief. Luckily for you as the reader, I will only include the successful recipes, so you don’t even have to deal with 90% of the experimentation-related struggles that I had to.

Bring to a simmer and then reduce until the sugar begins to just turn golden. Take off heat, stir, and pour into the large silicone half dome molds. For the actual wind chime, carefully rotate the silicone molds, making sure that the sugar is evenly distributed inside of the molds. Place a parchment sheet underneath the mold and turn upsidedown to allow the excess sugar to form a foot at the bottom of the domes. 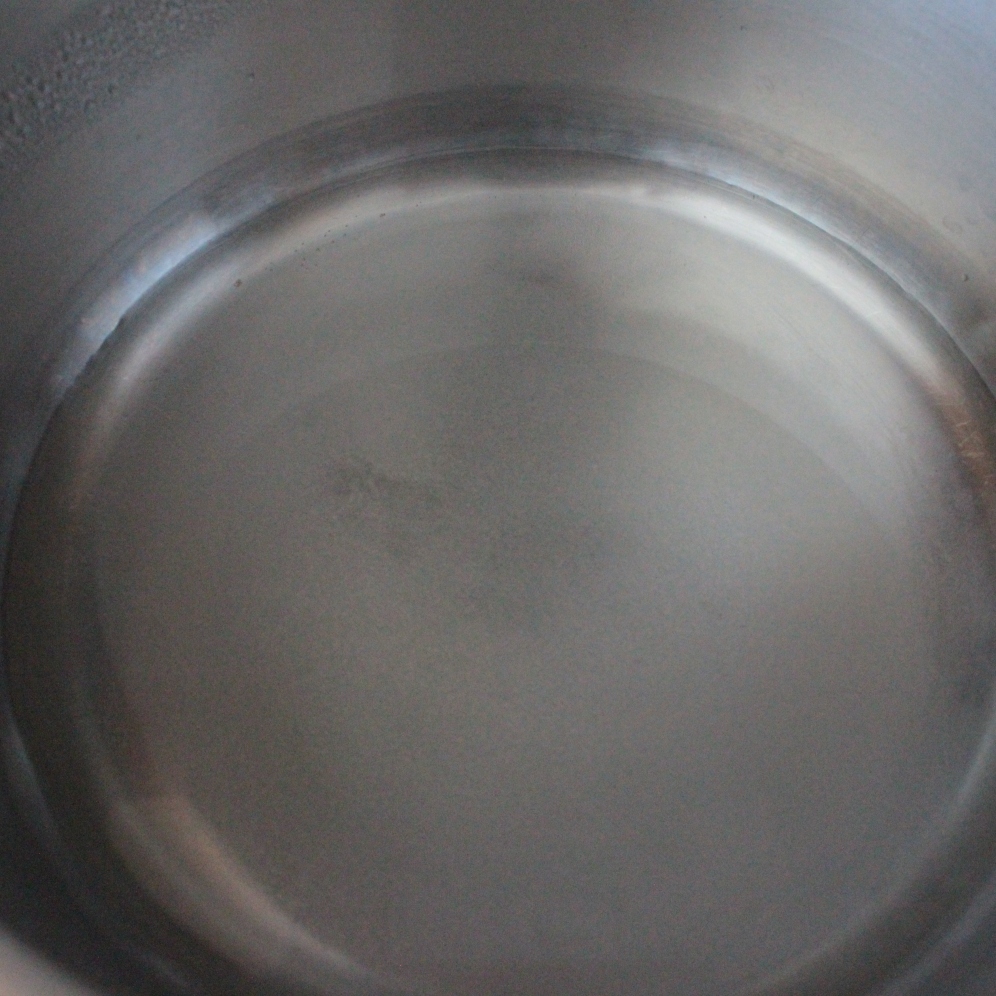 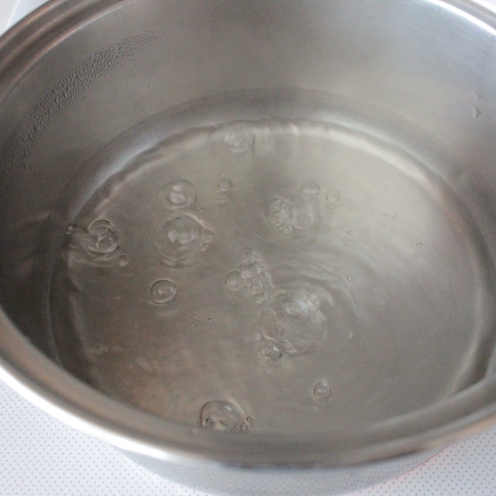 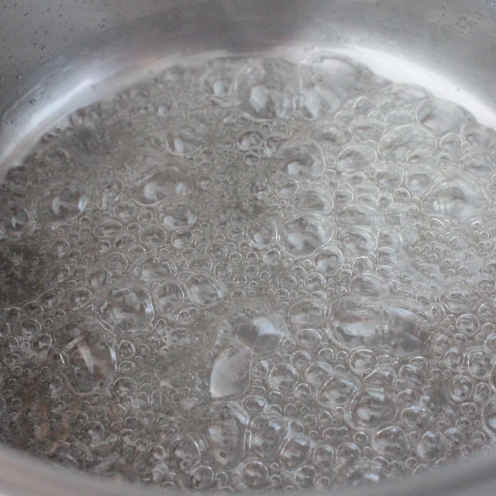 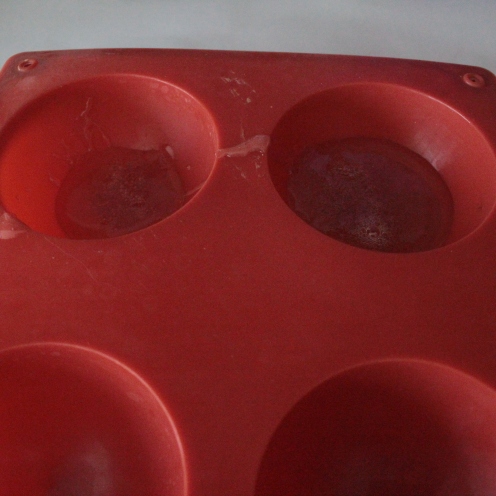 Wait for about 5 minutes before checking on the domes. Using scissors, cut off the sugar feet, just so that you are left with even half domes of sugar. These sugar feet will actually be re-purposed into the strings for the chimes.

Melt together the sugar feet and the water and reduce down until the mixture starts to turn slightly darker in color. Shock the pot with cold water, and then pull the sugar using a rubber spatula to create threads. Roll the threads together to form a sturdier string for the final plating.

Whip the egg whites with the granulated sugar into soft peaks. That means that the peaks of the meringues will stand up, but not straight up. If you whip them past stiff peaks, just stir with a rubber spatula to remove the additional air in the meringues. Transfer to a piping bag and pipe onto the backs of a small silicone half dome mold. Dust with cocoa powder and bake at 200 degrees F for 1 1/2 hours. 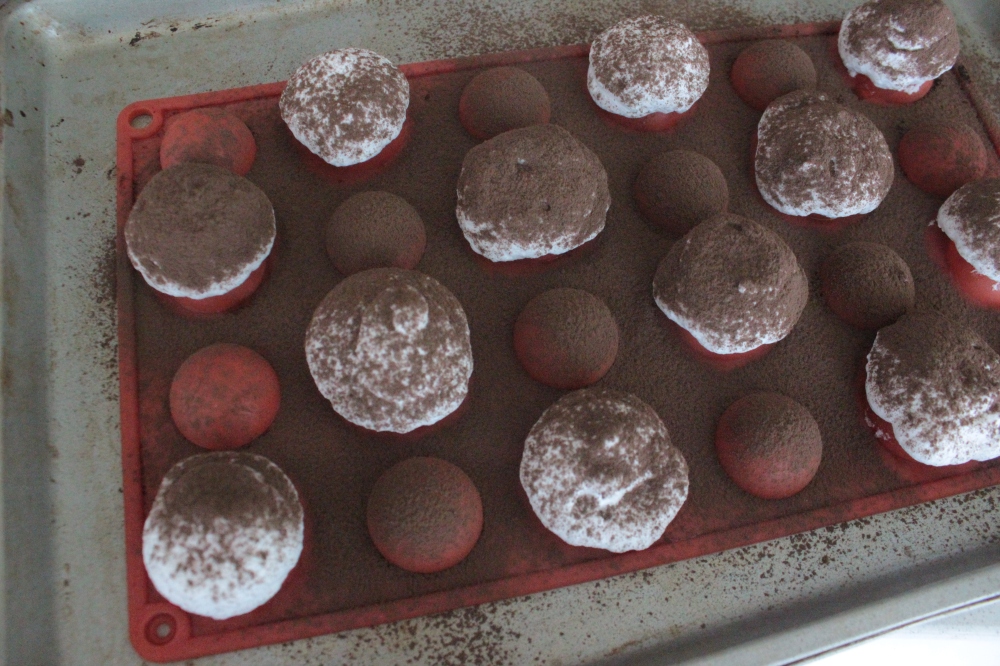 Melt down the chocolate in a double boiler with the egg yolk and salt and then set aside to cool down to room temperature. Whip the heavy cream into stiff peaks. Take half of the cream and fold into the chocolate before folding in the remaining cream. Transfer to a piping bag and chill until plating. 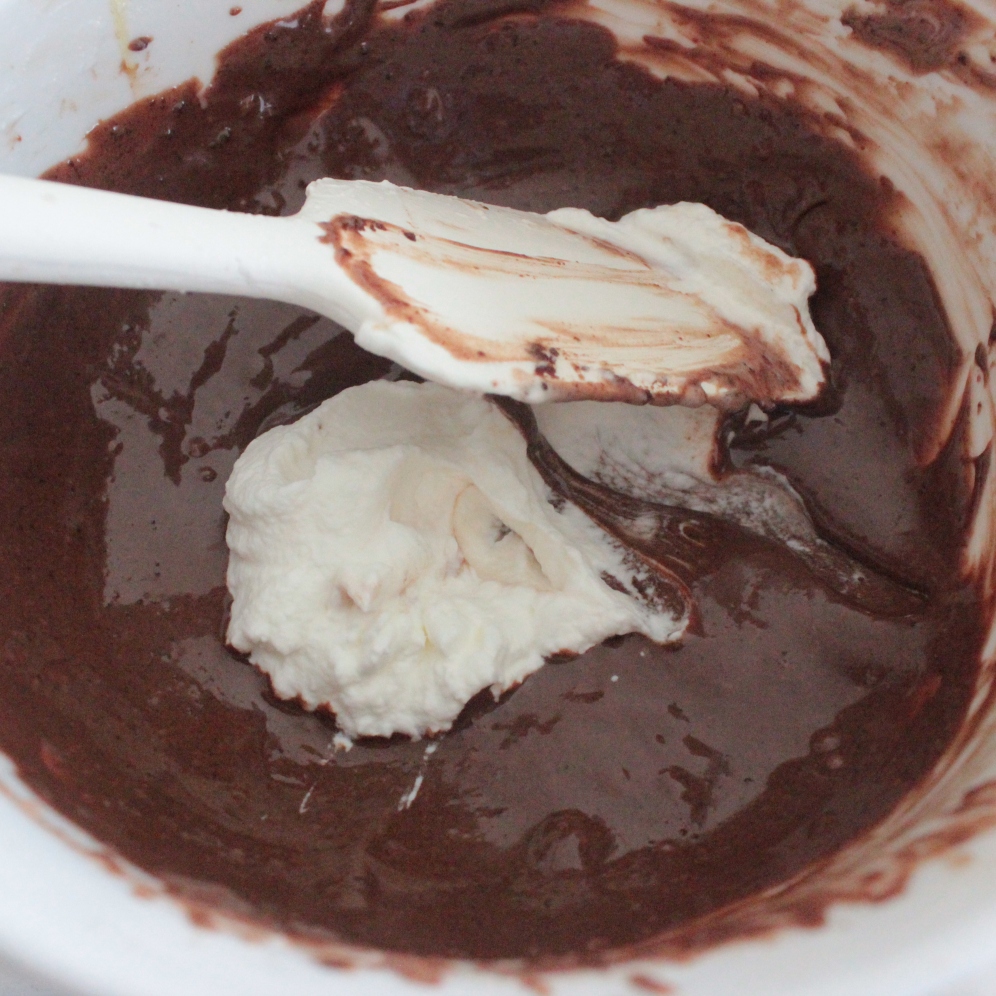 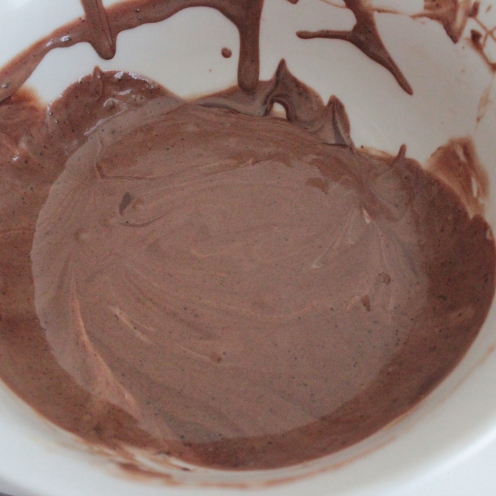 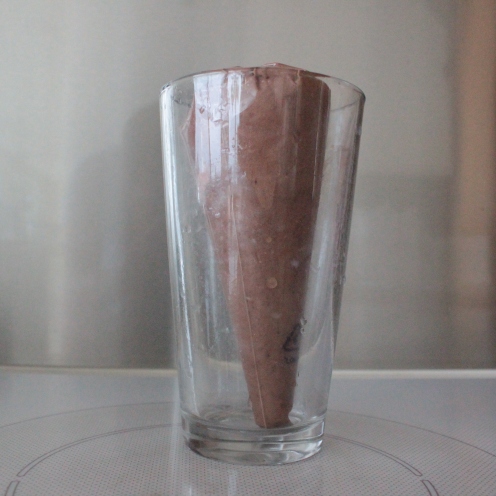 Melt down the dark chocolate with the egg yolks, cocoa powder, and salt. Whip the egg whites with sugar into stiff peaks. Fold together the egg whites, the chocolate, and the chopped walnuts. Spread on a parchment sheet and bake at 350 degrees F for 20 minutes. Break apart the cooked and cooled chocolate cake into a course crumble. 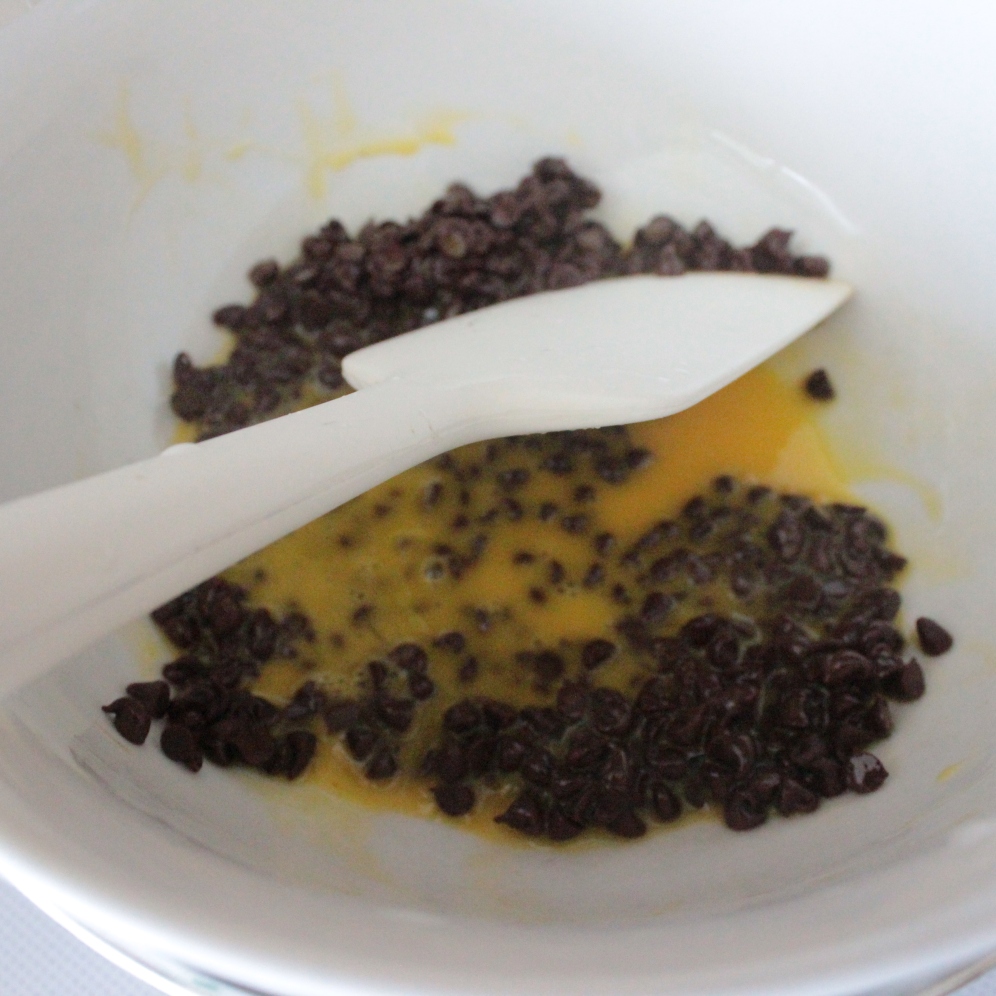 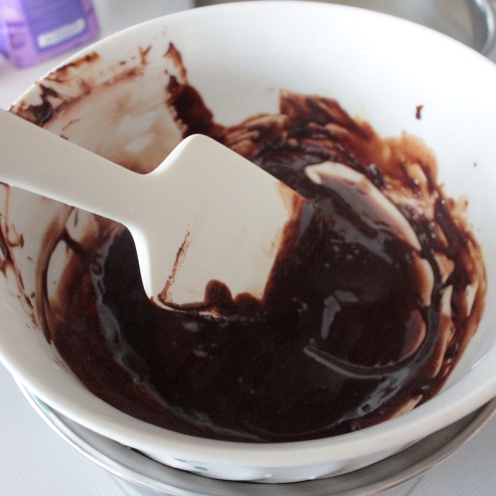 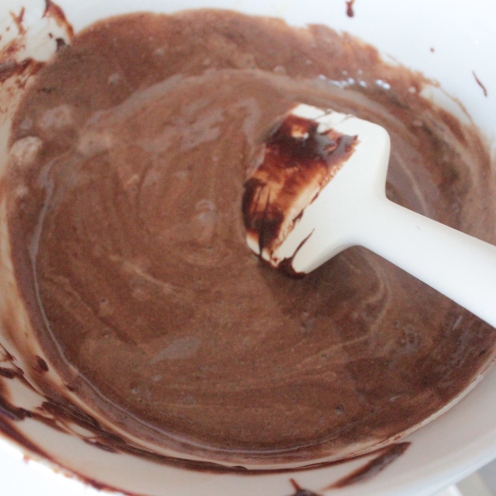 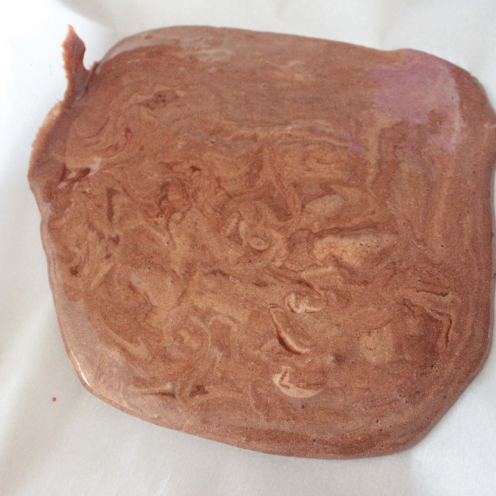 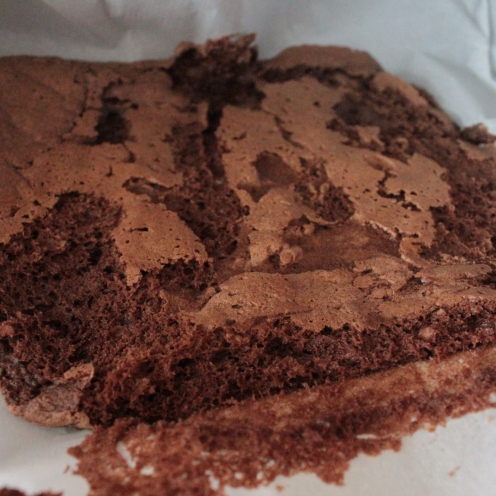 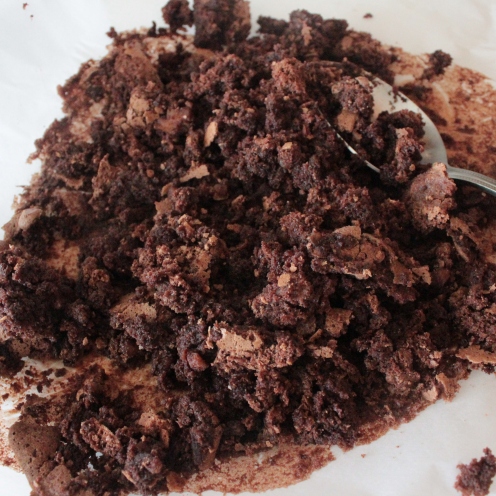 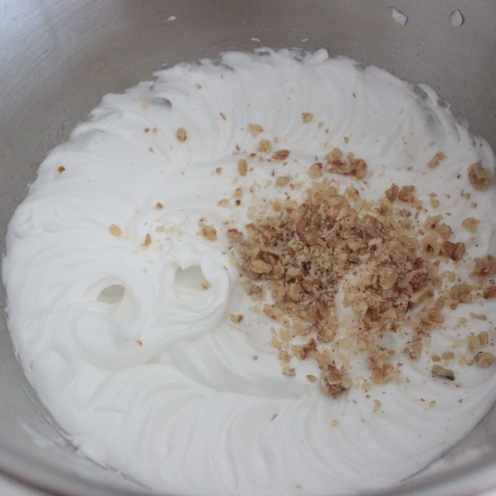 Combine ingredients and bring to a simmer. Pour onto a flat surface and chill until it solidifies. Cut the solidified gelee into rectangles. 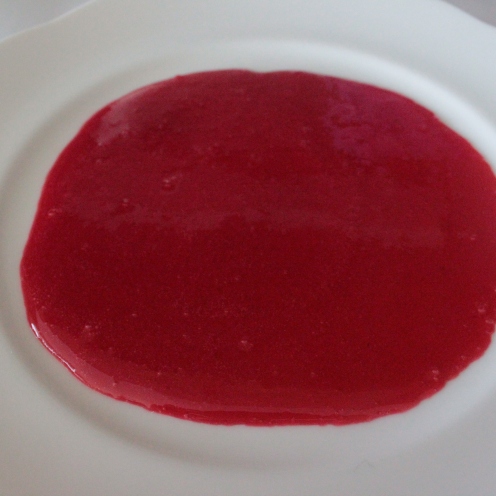 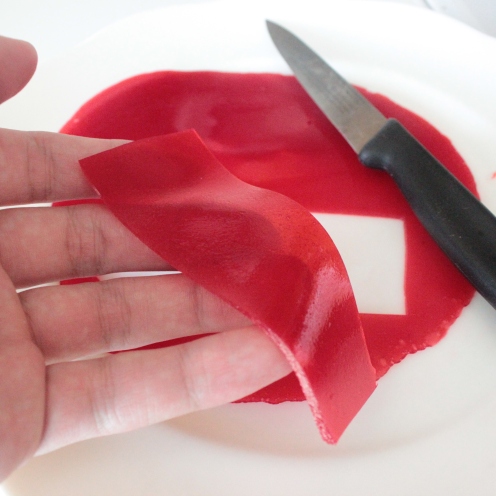 Reduce together the ingredients and strain out the raspberries, pressing to extract as much pectin as possible. Reserve half of this coulis for plating and use the rest of it in the gelee tag recipe. 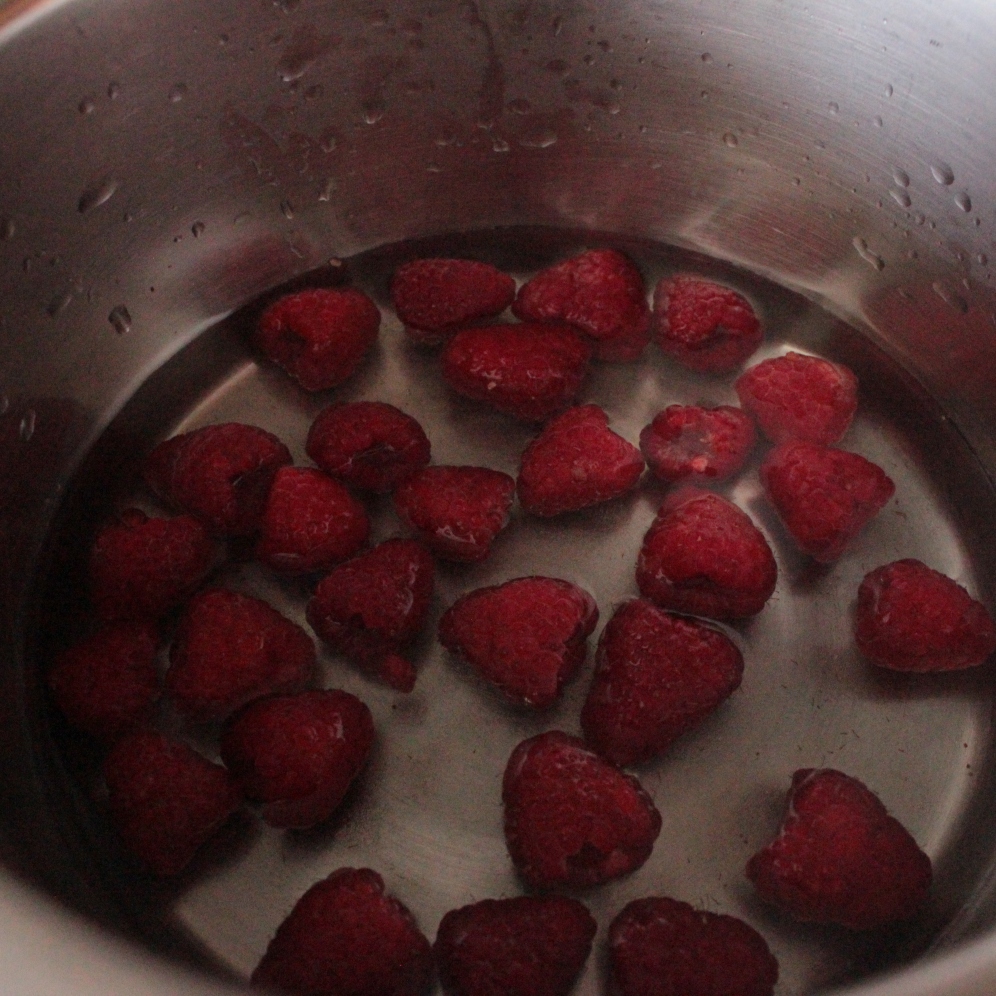 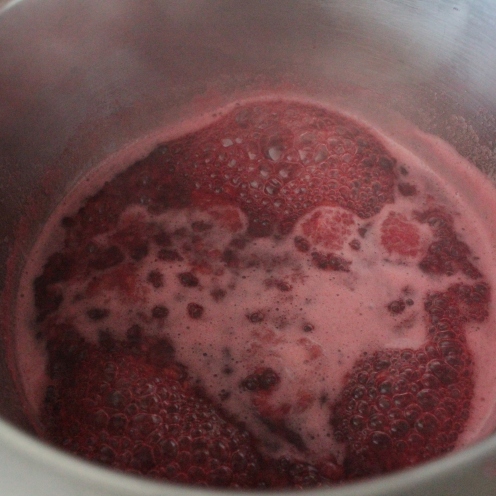 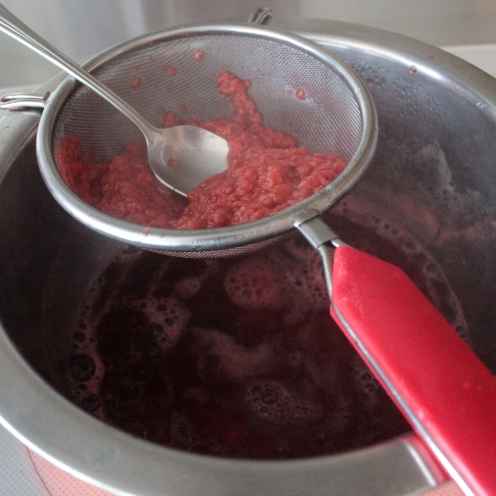 Start with a trail of the chocolate soil. Then add on the raspberries, and the tag. Place on the half of sugar dome, and plate the string so that it is connected to both the dome and the tag. Pipe the mousse into a meringue cup and place next to the string, between the tag and the dome. 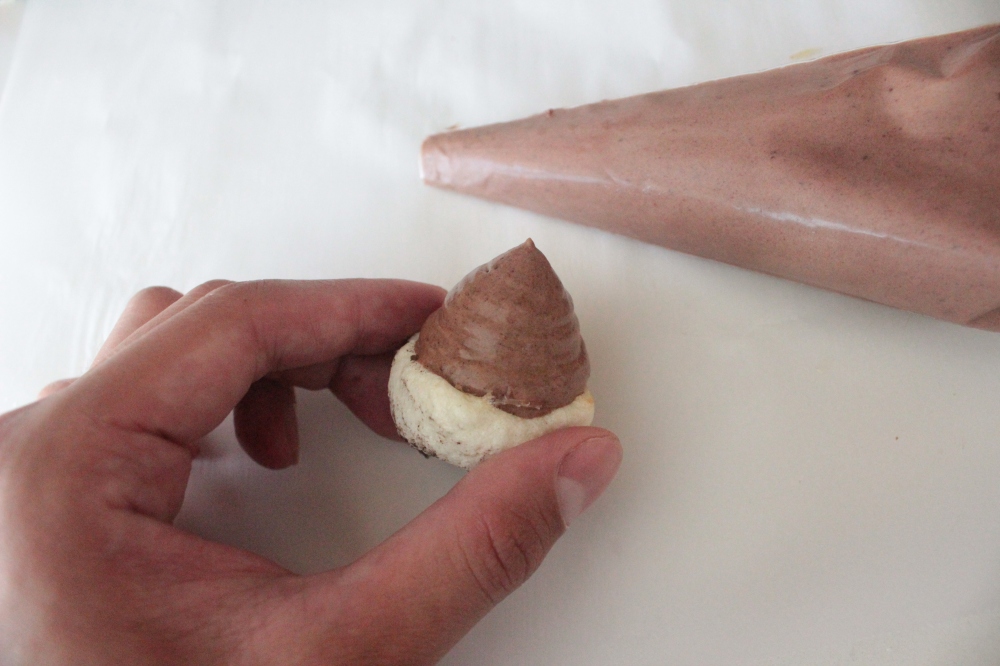 Finally, before serving, add in the coulis and serve immediately, so that the coulis doesn’t melt the dome right away. 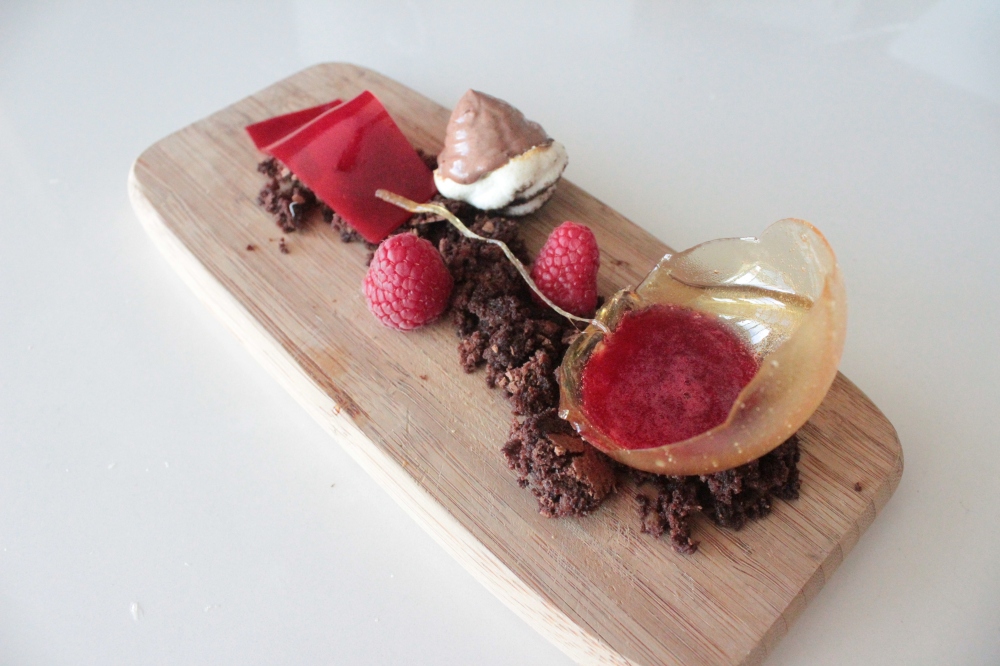