So the idea to make a vegan macaron sandwich came up a long while back, I think in December 2019. But I never really got a chance to make them, mostly because I was too lazy to buy a can of chickpeas to make aquafaba. But recently, a bunch of stars sort of aligned, and I felt the need to attempt these. The first was my friend Ann, who outright made her own vegan macarons for a friend. The second was my friend Karen, who sent me a picture of cherry blossom macaron ice cream sandwiches. The third was talking to my friend Shari, who is like the macaron queen, and us deciding to hold each other accountable for trying to make these. I mean, it was easy enough for me to do them. I had a friend who had done it before for me to ask questions from(mostly just if the batter behaves similarly to a regular macaronage when folding, and it does), a friend who gave me a flavor inspiration, and a friend who made sure I followed through with making this. For my presentation, I definitely want the pale white macaron to contrast a vibrant, pink filling to represent the color of an actual sakura tree, which is white bark with pink blossoms. I personally love how the gelee looks like little crystals, peaking out from the sides.

So I obviously mentioned doing a cherry blossom, also called sakura, flavored macaron ice cream sandwich. And the entire thing is vegan, including the ice cream. So for the different components, we obviously have the macaron itself, a sakura-soy milk ice cream, and a sakura-lime gelee. For vegan ice cream, the two things you need to make any vegan ice cream work the same as a normal one is cornstarch and coconut oil. The coconut oil adds fat, while cornstarch binds the base in a similar way to egg yolk. For my gelee, I wanted to use a citrus to brighten it up, and since I had made gelees with blood orange, lemon, and yuzu already, lime was in line to be used next. I use pitaya anyways to color it, so it doesn’t really matter what kind of citrus you use honestly. A tip with the cherry blossom, I used salt-brined ones, which are obviously very salty. You’ll notice my entire recipe doesn’t even use salt because of this. With the aquafaba, I recently came across canned chickpeas that don’t have salt added, so I recommend going with those for this recipe, just because the salt from the cherry blossoms can be a bit much on their own and the recipe definitely doesn’t need any more salt in it.

Whisk together all of the ingredients except for the vanilla until the mixture thickens to the consistency of heavy cream. Transfer to a blender and puree with the vanilla until everything is fully smooth and incorporated. Pass through a sieve and chill down the mixture first. Churn in your ice cream machine and then transfer to a shallow tray. Freeze overnight to firm up before cutting out 1/3 inch cylinders.

For the macaron shells:
1 can chickpeas, with no brine
1 cup almond meal
1 1/4 cups powdered sugar
1/3 cup granulated sugar
a pinch of cream of tartar

Open the can of chickpeas and reserve the liquid. You can do whatever you want with the actual chickpeas, but the liquid is all we need for this recipe. Reduce that liquid to about 1/3 of what it was originally and chill down for an hour, just to get it to thicken. Whip with the granulated sugar, cream of tartar, and salt to stiff peaks. Sift the almond meal and powdered sugar together. Fold everything together, and continue folding until the batter is thin, but still thick enough to form a figure 8 with. Transfer to a piping bag and pipe onto a parchment-lined sheet tray, about 1/2 inch circles, 2 inches apart from each other. Tap down the pan to release air bubbles. Allow the macaron to sit for at least 1 hour in a dry location. Preheat your oven to 290 degrees F. Bake for 7 minutes, and rotate and bake for another 7 minutes. Allow them to cool completely before attempting to use them.

For assembly:
Cut the gelee into small (1/8th inch by 1/8th inch) squares and slice thinly to guarantee that they are crystal clear. Start by placing one cylinder of ice cream on top of a flat side of a macaron, and garnish the sides with the gelee. Top with the other half and serve immediately. Now you can freeze these as well if you don’t want to eat them right away, but I like to eat things as soon as I possibly can, and these are only one bite anyways. 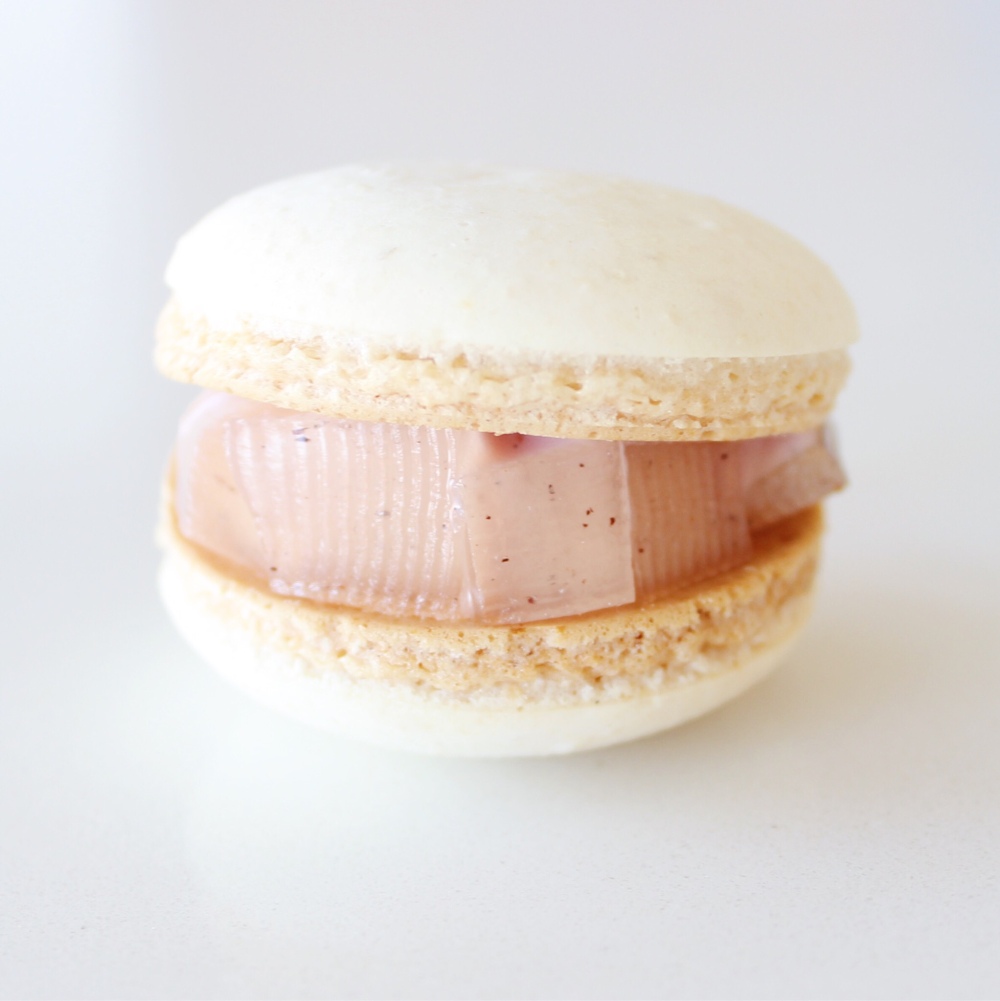