For St. Patrick’s Day, I had to go one of two ways. Either a green dessert, or an Irish-y dessert. I went with the latter, to a degree. I wanted to do something with stout, since that’s huge in Ireland, and I also wanted to do something with a pot of gold as the inspiration. So I literally went there. This dessert went through a couple different stages. Mostly because I struggled with figuring out how I wanted to make my pot of gold. On one hand, I did want to do a tempered chocolate ball made from a balloon, but I didn’t want to buy balloons for that. And then it hit me. I could do a mousse sphere. I had done them before for my MasterChef season 9 audition dish, but I haven’t done any since . So I went with a mousse sphere, inspired by Janice Wong’s cassis plum dessert, as my base, using the Irish stout to flavor it. The rest of my ingredients, I went with barley as a play on stout and beer, to make a crumb base, and brown butter and blonde chocolate to contrast the beer (as a play on butter beer from Harry Potter) and because visually, they give off a golden coloration to the dessert that I just love. Truthfully, this is a really simple dessert to make, but it is visually striking because of the sharp color contrasts with the dark sphere and the gold garnishes.

Cook down the dark stout first until the alcohol is cooked off, and then add in your brown butter, bloomed gelatin, and xanthan gum. Transfer to a stand mixer and whip until airy and light. Melt down your chocolate, cacao, and charcoal together, and fold in the whipped stout mixture. Transfer to a silicone half dome mold (3-inch), then freeze for about 1 hour. Scoop out about 2 inches from the centers and freeze for another 2 hours until solid. Using a 1 1/2 inch circle cutter, warmed with either hot water or a blowtorch, carefully cut out holes from two of the halves. Warm the flat sides of the spheres that are still in the mold, using a blowtorch on the absolute lowest setting or preferably a candle lighter. Press the flat sides of the holed out spheres together, and refreeze until set (about 30 minutes). Keep refrigerated for as long as possible.

Heat up the sugar in a nonstick pot until it begins to brown. Pour in the malted milk and brown butter first, stirring carefully until deglazed and incorporated, then add in your blonde chocolate. Temper in the egg yolks and cornstarch. Whisk on medium-low heat until the mixture has thickened and everything has combined. Pass through a sieve, chill down, and transfer to a piping bag.

Combine into a dough and chill down. Roll out between two sheets and bake at 350 degrees F for about 8 minutes. Break into smaller pieces.

Melt down the chocolate and pour in the barley. Spread out onto a sheet tray and bake at 250 degrees F for about 30 minutes. Blitz into a food processor into a fine crumb.

Pipe the custard inside of the sphere, and top with your sable pieces, and some gold leaf. For the actual plate, start with your soil, then dots of the custard. Place the sphere on top, and grate some blonde chocolate over to serve. 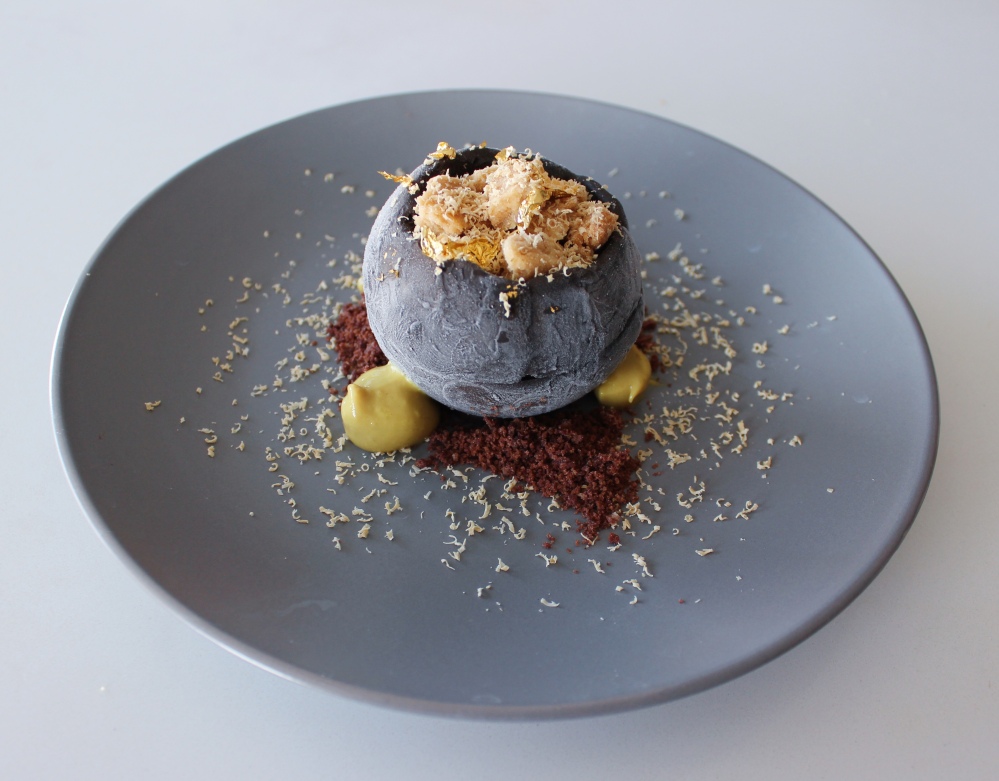