Now I have done knafeh in the past. But I have never had a chance to work with kataifi(shredded phyllo) due to never being able to find it. That is, until my coworker, Desiree, told me about a middle eastern market that was actually really close to where I live! Super special thank you to Desiree, because had she not told me about the market, I would have never had a chance to make knafeh with the better-known dough!

So for my version, just to keep it from being boring, I actually used sea buckthorn oil to dye my dough orange naturally. Normally, knafeh is dyed orange-gold with either saffron or artificial coloring, but since I have an abundance of sea buckthorn oil, I opted for that instead. For the filling, it’s still the traditional ricotta-mozzarella filling. For the topping, I wanted to be playful, and use pistachios AND hazelnuts, and making my own play on dhukka spice. Normally, dhukka is savory, but omitting the cumin makes it dessert-friendly. For the syrup, I would normally use rose jam, but for this one, I decided to go with the traditional rose water, just so that I can practice using it.

Melt together the butter, oil, and salt. Allow the kataifi to thaw per the instructions on the box. Toss the kataifi with the butter, making sure to evenly distribute the coloring so that every strand of dough is colored orange.

Combine together. Line a 10 inch square mold with melted butter, and spread two thirds of your phyllo dough along the bottom and edges of the pan. Pour in your filling and cover with the rest of your dough. Bake at 375 degrees F for 50 minutes.

Reduce until sugar is just melted. Cool down the syrup. Pour over the knafeh while the knafeh is warm.

Toast together on low heat and then blitz in a food processor until the nuts are just slightly crushed. 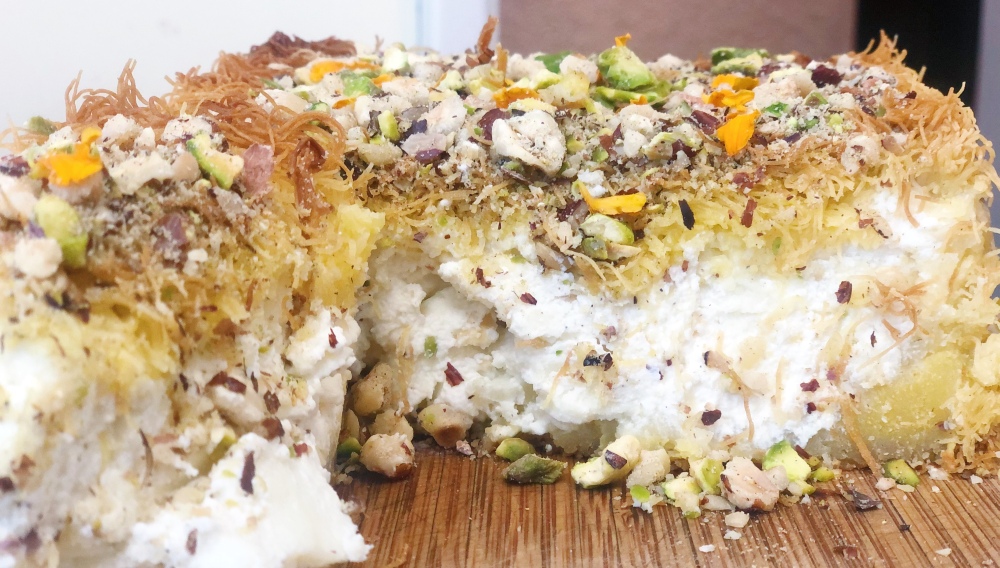