I literally came up with this dumpling while I was driving to Milkbar one Saturday morning. I was craving Chinese brunch, and I remember eating dou jiang, or warm sweetened soy bean milk, with youtiao, or kruellers. For those of you who aren’t familiar with soy bean milk, it’s Chinese soy milk. Unlike the Silk brand soy milk or the other kinds of American soy milk you find in the grocery store, soy bean milk tastes naturally nuttier and sweeter, almost like uncoagulated tofu, since that’s what it basically is. And from there, I just remembered that there was a savory version of dou jiang as well. This one wasn’t sweetened, and had herbs, chili oil, and Taiwanese pork floss in it. Pork floss, in case you don’t know what that is, it’s shredded pork meat that is fried and sweetened, so it’s fluffy, crunchy, smoky, and sweet. It was definitely a different experience than the plain, sweetened soy bean milk, but I loved it nonetheless and knew that I could make a dumpling out of that flavor combination!

For my dumpling, I went with a pork belly and pork floss based stuffing, since that would be a little whimsical and fun, and I added the usual works in there, with soy, pepper, shallot, ginger, and I did the tuile that I almost always do with potstickers. To garnish the dumpling, I made an umami-infused soy bean milk, using unsweetened soy bean milk, kombu, and dashi. The end result of that is something that almost tastes like a liquified bean curd. With the chili oil, I just had some at the end to add the heat, to take away any sweet notes from the milk, and some microherbs, just to make it prettier. 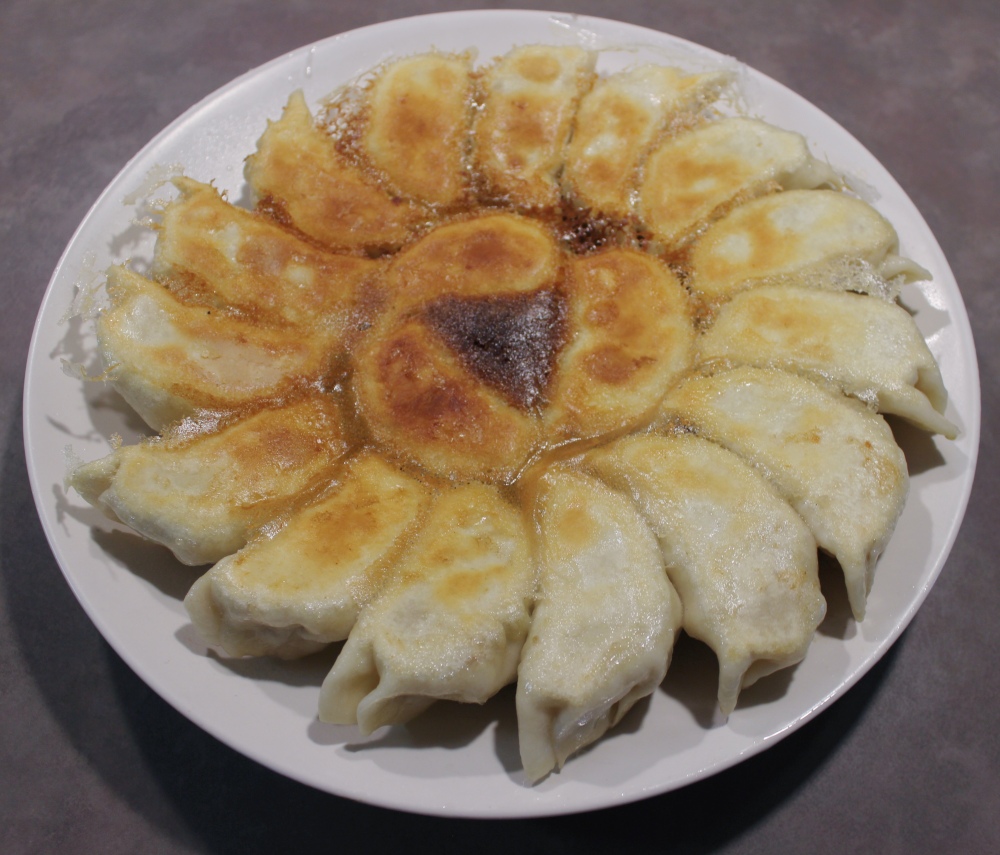 Combine ingredients until incorporated and uniform. It should have almost a pasty texture to it.

For the dough:
1 cup all-purpose flour
1/4 cup water
a pinch of salt

Combine into a dough and divide into half repeatedly until you have 16 evenly sized pieces. On a floured surface, roll each dough piece into perfect circles that are about 1 1/2 inches in diameter. Place about 1 1/2 tablespoons of filling into the wrapper and crimp the edges. Line a nonstick pan with some rendered pork fat and bring up to medium heat. Place the dumplings in first and allow them to sear off for 1-2 minutes while you make the tuile batter.

For the tuile:
1 cup water
2 tablespoons all-purpose flour
a pinch of salt

Combine together and pour over the dumplings after they have a golden brown sear on the bottom. Place a lid on your pan and allow them to simmer, lid on, for 3-4 minutes, before removing the lid and allowing the liquid to continue cooking off until you are left with a lacy, golden brown tuile at the bottom of your pan. The edges of the tuile should be coming off of the pan already, similarly to how a crepe would. Flip the dumplings out onto a plate. For serving these, I broke the dumplings apart into smaller pieces, but you could just serve it whole and family style.

Simmer together until kombu is completely soft. Strain and press the release as much flavor from the kombu into the milk.