On the back of that wedding challenge, the elimination that followed was a freaking outdoor grilling challenge, in the patio where we all stood during the helicopter intro! It was crazy! The contestants on the losing Red Team had to choose from a huge variety of steaks and grill a dish in an hour. Which honestly, that wouldn’t be a challenge, unless you know how to grill. RIP Keturah and Wuta on that one. Especially Ket. The competition was a lot less comical and hilarious without her there. But back to the dish. While I did not have to cook in this challenge, and in fact, got to chill on the patio with our winning team, I still thought about what I would have made in this challenge. And seeing the ribeye, aka the only steak I can comfortably and consistently cook perfectly, I knew I would have done a play on beef and broccoli.

The dish itself takes inspiration from the amazing chef Shirley Chung’s gorgeous rendition of it that she serves in her restaurant, Ms. Chi’s Café, in Culver City. I would feature the ribeye with broccolini and onions, but I wanted to use other flavor profiles like soy, brown butter, ginger, and cilantro to really bring it to life. I would keep the seasoning on the steak really simple, using miso in my marinade just to really tenderize the meat. For the broccolini, I would have done it two ways: blanched then grilled, as well as in a puree with scallions, cilantro, lime, and ginger. For the final dish, it would be ginger-paprika-red miso rubbed ribeye steak with an herbed broccolini pesto, charred broccolini, beef-braised onions, and a brown butter-miso sauce. I would garnish the steak with some lightly dressed broccolini leaves and some scallions cut on a bias, just to keep it really light, fresh, and pretty.

Combine ingredients. Allow the steak to marinate in the mixture for at least 20-30 minutes before grilling it.

Puree ingredients together in a food processor.

Heavily season the beef stock with soy sauce and steep in the ginger. Blanch the broccolini in the liquid then shock in ice. Reserve the beef stock liquid to use for emulsifying the sauce and braising the onions.

Season the onions aggressively with salt and oil. Char on the grill before finishing off in the stock, braising them in the liquid until soft.

Emulsify the ingredients together in a blender first. If necessary, reduce on super low heat, or whisk until combined.

Heat up a grill pan or cast iron. Sear off the steaks in oil on both sides for at least 2 minutes, then roast at 400 degrees F for 4. Rest the steaks before slicing into them.

To plate, start with the sauce, then the puree, and then the broccolini stems. Fan on the sliced steak and garnish with the leaves, onions, and scallions. 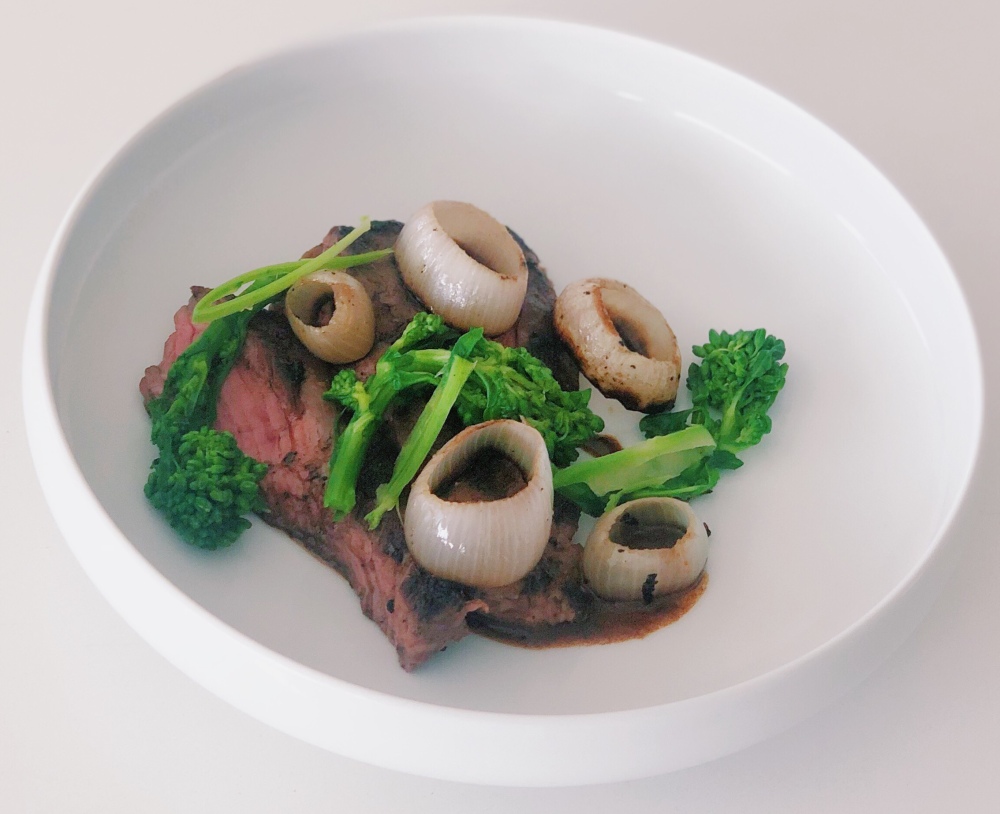