I really wanted this dessert to be the sister counterpart to “kakawari”, as it is based on yet another song by TrySail, and almost a given here, another theme song from Magia Record. The name roughly translates from Japanese to English as “waning” or “fading”, or an unfortunate kind of change. Since my other dessert features strawberries, macaron, and elderflower, I actually wanted to use those three same flavors, and essentially components from the original dessert, but flip them around, to represent an unfortunate change or turn of events. So we have a macaron crumble, elderflower semifreddo, elderflower-macerated strawberries, and a white balsamic-strawberry agro dulce.

I basically wanted to take everything from the “kakawari” dessert and present it as if everything went wrong. So we have a macaron that got smashed to pieces, an elderflower bavarois that sat in the freezer FAR too long, and the berries were prepared in a way as if they were too ripe and sort of just became mushy in the process of trying to slice them. With the agro dulce, I sort of opted for that route because I felt like I had been doing FAR too many fruit curds, even in my savory dishes, so I just wanted to do something different from that. Using white balsamic helps as it is not sweet, just tart, and that gives more leeway for the macaron to be on the plate, as it would be a really sweet component, basically straight up sugar, if presented with other sweet components. The beauty of this dessert really lies in the fact that you don’t have to be that technical and in fact, failing it okay. The macaron crumble is intentionally made with a macaron batter that ignores macaronage, uses significantly less sugar as well, and throws all of the refinement in it out of the window, fully embracing that. This is the one dessert where you could almost get away with dumping things into bowls and into pans.

Whip egg white with sugar and salt to stiff peaks. Fold ingredients together and pipe into small dots on a lined sheet tray. Bake at 300 degrees F for 15 minutes. Allow the pieces to set at room temperature before transferring to a food processor and blitzing into smaller, finer pieces.

Melt sugar and salt into lemon juice and liquor and bring to a simmer. Pour over your eggs while whipping on a double boiler first, then continue to whip off heat until the mixture reaches ribbon stage. Whip cream to stiff peaks as well, and fold into the cooled down egg mixture. Transfer to a piping bag and pipe into lined 1 inch dome molds and freeze solid, about 1-2 hours.

Bring all of your ingredients to a simmer and allow it to cook down, lid on, until the strawberries are completely softened. Transfer to a blender and puree until smooth. Pass through a sieve and transfer to either a piping bag or a squeeze bottle.

Toss together and allow the strawberries to sit in that mixture for at least 15 minutes.

To plate:
Start with a trail of the crumble, then adorn with dots of agro dulce, the domes of semifreddo, and finally, your macerated strawberries. 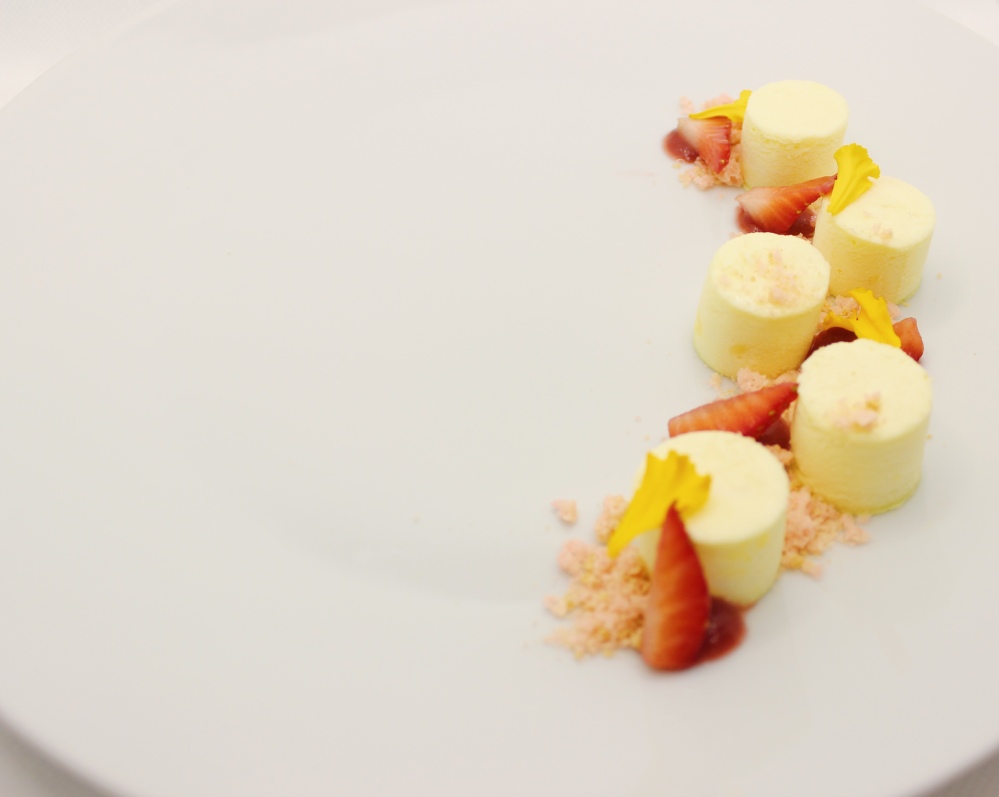